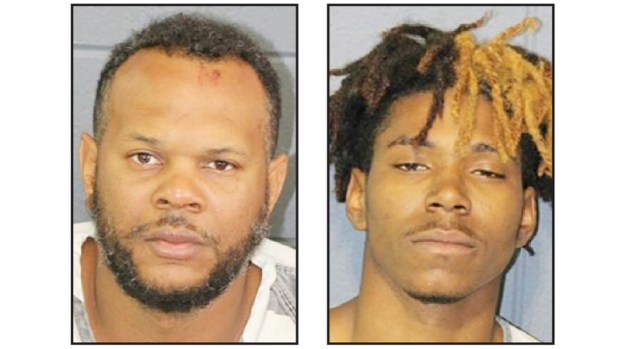 George Simon and Tahjavon Boatman were arrested this week for their roles in a wild and violent police chase through LaPlace Wednesday evening that left a third suspect dead.

LAPLACE — Two men with ties to St. John the Baptist Parish are facing charges following a wild and violent armed robbery and chase that left a third suspect dead and spanned 12 hours and multiple parishes.

Ronald Walker, 53, of Kenner died at the hospital Wednesday night, authorities said, the result of injuries sustained during a motor vehicle crash and from a jump off the elevated portion of Interstate 10 of at least 30 feet.

The brazen holdup involved a military-style rifle and customers and employees forced to the ground through the threat of violence. As much as $60,000 in merchandise was reported stolen from the high-end clothing store, which included individual items valued at more than $500.

The holdup led to a police chase eight hours later in St. John Parish that involved a third person unrelated to the store robbery. Walker was killed as a result of injuries suffered during the afternoon rush-hour pursuit that resulted in numerous wrecked vehicles.

“I really believe in this case that prayers and training worked, and not necessarily in that order,” St. John Parish Sheriff Mike Tregre said.

“It was an awesome job all the way around. I can tell you right now, had they had a gun in that car, there would have been a shootout. No doubt. They were running for freedom. There was nothing that was going to stop them.”

Jefferson Parish Sheriff’s Office police said a Crimestoppers tip led to the identification of Simon as a robbery suspect and to his potential location at 108 W. Oakpoint Court in LaPlace.

A member of the St. John Sheriff’s Office assigned to the U.S. Marshals Task Force began surveilling the LaPlace address in an unmarked unit at approximately 5:30 p.m. Wednesday, identifying a black Infiniti SUV in the driveway.

“While conducting surveillance, three individuals got out of the car and went into the house,” Tregre said. “My officer then called for additional unmarked units to do surveillance.”

When additional units responded, the three subjects were observed getting back into the SUV and driving away.

The St. John task force officer, along with several detectives, initiated a traffic stop on the SUV at 6:34 p.m. at Country Club Drive and St. Andrews Boulevard.

“The driver pulled over and was on his cell phone,” Tregre said. “The officers approached the vehicle and he accelerated and almost hit two officers.”

The suspect vehicle sideswiped one car and, when arriving at Belle Terre Boulevard, turned left toward Airline Highway before making a hard right at the Corner Store gas station near Foxwood Subdivision.

The SUV hit a curb as officers tried to box in the vehicle, sustaining a flat tire in the process before getting into the wrong, oncoming lane of traffic on Belle Terre Boulevard and heading north toward Interstate 10.

“He is bucking traffic with cars coming toward him,” Tregre said. “At some point, he crossed to the other side and made it to I-10 eastbound. When he got to I-10 and U.S. 51, the traffic was backed up due to a traffic accident that happened earlier.”

The SUV continued eastbound on I-10, reaching the elevated portion using the shoulder and sideswiping more cars “going over 100 miles per hour.”

The SUV eventually crashed into the rear of an 18-wheeler, and all three subjects got out of the vehicle and jumped over the guardrail.

“Two of them take off running,” Tregre said. “We caught those two. The other was still there. Apparently, he had massive internal injuries. He was still alive and still resisting. Even though he was fighting us, we managed to restrain him, put him in a unit and rush him to the hospital. He died at Ochsner hospital.”

Tregre said authorities performed a search Wednesday night of the LaPlace address, where the pursuit was initiated, recovering evidence linking the suspects to the robbery.

Arrested with Simon was his stepson, 20-year-old Tahjavon Boatman of LaPlace. Police said Boatman is not believed to have participated in the armed robbery.

Boatman is charged with misdemeanor flight from an officer.

According to nola.com, Simon has a criminal history that includes thefts targeting high-end retail stores. Many of his prior arrests have been on drug and battery charges, but he was also booked in the 1990s with an attempted first-degree murder, Jefferson Parish Joseph Lopinto said.