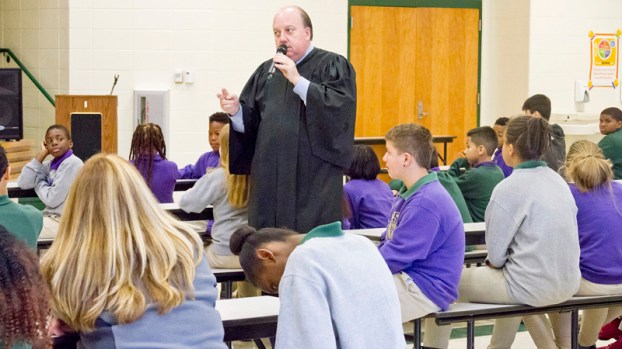 LAPLACE —Fifth through eighth grade students at Emily C. Watkins Elementary were reminded Monday morning that tough times don’t last, but tough people do, and it’s up to each individual to control their life through positive choices.

St. John the Baptist Parish 40th Judicial Court Division B Judge Jeff Perilloux and staff visited the school to encourage students to stay on a path to success, a proactive measure to keep young people in the classroom and out of the courtroom.

The importance of education was a highlight of the lesson, according to eighth grader Lyneece Sanders.

“I feel what they told us about education was important,” Lyneece said. “If kids my age don’t get a good education, they’re going to end up in juvenile prison or doing something wrong with their lives, such as getting involved with drugs.”

A room full of Emily C. Watkins middle school students raised their hands when Juvenile Probation Officer Raffeal Neal asked who planned to go to college. He spoke on the importance of achieving long term and short term goals and taking responsibility for school safety.

Joshua Argueta, an eighth grade student, said the most important lesson he’s taking away from the talk is decisions he makes today have consequences that impact his future.

Eighth grader Najon Cade said Perilloux’s definition of character as doing the right thing when no one else is looking sticks with her. She said it’s nice to see a judge come to school and say he doesn’t want to see children in court because it shows Perilloux is personally involved.

“It’s not just about a job,” Najon said. “It shows they are willing to care about kids.”

“If you see something, you must say something to a teacher or administrator,” Neal reiterated.

The visit to Emily C. Watkins was the second in what Perilloux hopes is a series of talks addressing elementary students.

During his campaign for judge, Perilloux emphasized the importance of school outreach, adding there are challenges today’s youth faces that his generation did not.

Social media allows for cyber bullying and the proliferation of instantaneous misinformation, according to Perilloux.

Drug culture and organized crime have become more prevalent in a younger population, he said.

From a law enforcement perspective, Perilloux said he is limited in what he can do from the reactive end, necessitating a proactive approach to expose children to positive role models.

“I think the youth of St. John need to understand that they’re not being given up on,” Perilloux said. “We believe in them. We know that they’re our future. We know we’re not going to save everybody, but if our message can affect some of them, we’re doing our part.”

Melanie Burl, Families in Need of Services coordinator for the 40th Judicial Court, said there are services in place to help children who have committed status offenses such as curfew violations and truancy.

She said the FINS program helps parents advocate for their children through family counseling, anger management and access to additional resources such as substance abuse or mental health facilities.

Utilizing community resources such as extracurricular and recreational activities and mentoring programs could prevent juveniles from wandering down the wrong path, according to Burl.

Burl encourages parents to be diligent and monitor what their children post online.