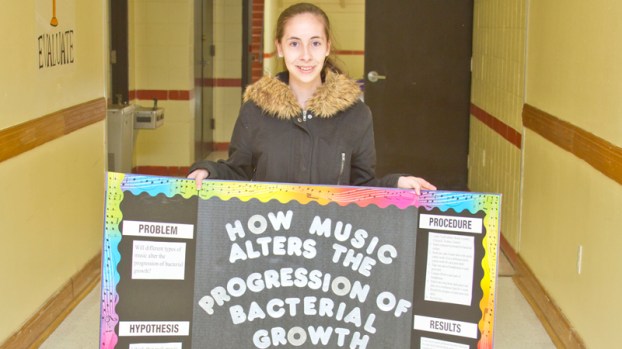 LAPLACE — Lexi St. Pierre’s creative spirit shines through in all she does, whether it’s art, writing or school activities.

“I’ve never gone past the school level science fair, so I was pretty psyched about placing first in district and regional,” Lexi said.

The Garyville resident chose the project because of her interest in music and discovered rock music — one of her favorite genres — speeds up the progression of bacterial growth.

The science fair isn’t the only recognition Lexi has received recently.

In December, members of the St. John the Baptist Parish School Board presented her with a plaque for her winning Christmas card contest entry.

Lexi St. Pierre shows off one of her favorite original pieces from her sketch book.

Styled after the television show “Supernatural,” Lexi’s Christmas card symbolized the joy of spending time with family during the holidays. She’s enjoyed art since she was 5 and has spent years drawing and coloring in the margins of her notebook during classroom free time.

Writing is another hobby that has culminated in a binder thick with pages of medieval, fantasy and romance stories.

“I just love writing stories,” Lexi said. “I’ve always liked ELA for that reason. I think I’d like to pursue a writing or art career in the future. Maybe I’ll become an author or an artist of some sort; maybe an animator.”

Principal Christal Sylvain said creative thinkers like Lexi should be celebrated for their unique and enriching ideas.

“Lexi’s whole spirit is artsy,” Sylvain said. “She’s really a cool kid because she has such an interesting perspective, and many times you often just have to give her an idea for her to bring this whole new world to life.”

Sylvain said Lexi is a good student academically who works hard and serves as a role model to others in being true to herself.

“She doesn’t have a problem with being an individual and who she is,” Sylvain said. “She lives and walks through life through that artist’s lens, not wanting to fit into a box.”

In forming her own identity, Lexi finds inspiration from other artists who share their talents with the world in online communities.

Elentori is one of the artists she looks up to.

“I want to keep getting better,” Lexi said.

“I’m inspired by her work because she makes lots of scenery drawings that are a mix between cartoon and realism, and she also creates amazing original characters.”

He said Lexi completes art projects in timely fashion and gives 100 percent in everything she does.

“Lexi is a great kid to have in class,” Millet said.

“She goes above and beyond all the tasks I ask of her because she’s always willing to learn. When we finish one project, she wants to know what’s next. She’s very, very talented in art and just wants to get better.”

Lexi said she doesn’t have a preferred medium and enjoys whatever project comes her way.

When she’s not working on her art and writing, Lexi participates in student council to make decisions that best impact the student body.

She’s a member of choir and is taking steps to become involved in drama, having recently auditioned for a part in a school production.

Lexi is the daughter of A.J. and Chloe St. Pierre of Garyville.