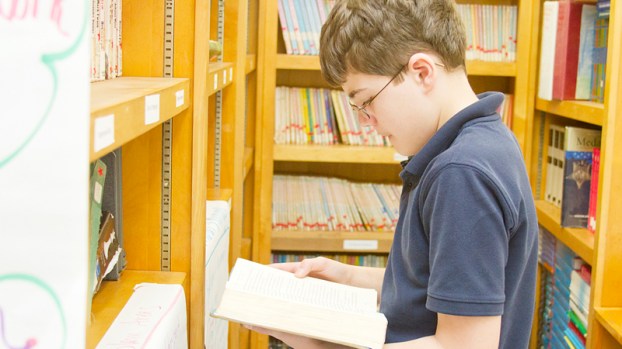 LAPLACE — Michael Reeves of LaPlace always shoots for the stars, whether it involves excelling in the classroom or aiming his telescope at the night sky.

Michael describes himself as a quick thinker, sharp and witty. He has an innate love of learning and aspires to earn a doctorate in astronomy.

“I’ve been interested in space for about a year,” Michael said. “I saw a YouTube video, and it got me hooked.”

He examines the moon through the telescope he received for Christmas and hopes to locate Jupiter.

His dedication to the field has not gone unnoticed. In sixth and seventh grade, Michael won school-wide awards for his interest in science. He has fun in the science fair, saying he would participate even if it wasn’t required.

Though he enjoys math and science and actively participates in STEM Club, Michael is well rounded and capable of success in all academic fields.

Last year, he was recognized for scoring a perfect 800 in social studies and achieving advanced in all other subjects through standardized testing. Consistently on the Principal’s List, Michael has never needed to be reminded to work hard.

Michael Reeves said he is looking forward to the state competition for student of the year.

Michael said his mother, Natalie Reeves, is a role model through support and encouragement. However, she never has to force him to do homework or study.

“His own self motivation and his desire to seek out knowledge and learn more is what makes him so awesome, and he’s been like that since he was a little kid,” Sylvain said.

“He’s an overachiever at everything, and he’s not trying to beat anyone else. He does it because he expects the best from himself. There’s a high standard he sets, and he reaches it.”

Sylvain said Michael has hit a couple of bumps in the road, but no one would ever know it from talking with him because he keeps what’s most important at the forefront.

“Michael Reeves is an all around great student,” Sylvain said. “No matter what he’s involved in, you know you’re going to get 100 percent across the board.”

Michael boasts an impressive list of extracurricular activities, including participation in choir, drum line, Jr. Beta Club, Explorers Club and Student Council, which he has participated in since sixth grade.

He said it’s hard to say what his favorite activity is, adding STEM Club and drum line would be tied for first.

“In STEM Club, we get to explore how the world works,” Michael said. “I like drum line too because I can learn the instruments very easily.”

Sometimes activities overlap and it gets overwhelming, but Michael aims to be involved in as much as he can.

It was the impressive resume of extracurricular activities that contributed to his school and district Student of the Year wins.

“I was kind of surprised I won because there were so many good students there,” Michael said. “After, I felt very accomplished. I’m looking forward to winning at State so I can inspire other people.”

LAPLACE — Foxwood Lane will be reduced to a single lane of traffic for 45 to 60 days, weather permitting,... read more