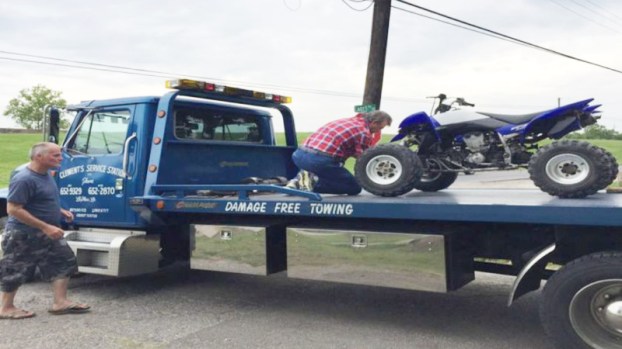 The St. John the Baptist Parish Sheriff’s Office said illegal ATV use was a problem during Mardi Gras.

LAPLACE — The goods times did not roll for everyone this Mardi Gras season, as the St. John the Baptist Parish Sheriff’s Office towed five ATVs and issued numerous citations in what many regional law enforcement agencies say is a growing problem.

Sheriff Mike Tregre said ATV drivers are consistently operating the vehicles illegally on state highways and public roads, a problem that has been difficult to prevent.

“As sheriff, I have tried multiple public service announcements, but it is cases like these led by Deputy Brent Remondet and Deputy Michael Duronslet that send a loud and clear message to other violators,” Tregre said.

“This may not be a major felony investigation, but I appreciate their efforts and determination regarding this investigation. Well done.”

Remondet and Duronslet, while in their units, were able to locate multiple ATV operators, issue citations and tow the off-road vehicles, Tregre said.

Patrol deputies responded to the 2300 block of Cambridge Drive in LaPlace Feb. 10 in reference to males on separate four-wheelers driving recklessly.

As officers attempted to conduct a traffic stop, two drivers fled in opposite directions and the third eventually stopped along Cambridge Drive.

This driver was issued multiple citations, and the ATV was towed. Deputies canvassed the area, but they were unable to locate the other ATV operators.

On Sunday, deputies observed males on separate ATVs traveling recklessly, cutting in front of traffic along Airline Highway. Police said the drivers fled into a lot, toward the railroad back to Main Street.

Upon crossing the railroad tracks, deputies observed a subject matching the description of one of the subjects attempting to get out of a ditch at the intersection of Cardinal and Dove streets.

Deputies made contact with the operator and issued multiple citations, and the ATV was towed. Deputies canvassed the area, but they were unable to locate the other ATV operators.

On Monday, deputies observed three ATVs traveling recklessly in the area of St. Andrew’s Boulevard and Country Club Drive. As officers attempted to conduct a traffic stop, the drivers recklessly fled to a wooded area along a canal bank.

One driver eventually stopped along the canal bank. The driver was issued several citations, and the ATV was towed. Canvassing the area of Oak Point Drive, deputies observed fresh tires tracks leading to a rear yard and made contact with the other two subjects matching the descriptions of the operators of the ATVs that fled.

These subjects were issued citations, and the ATVs were towed, police said.

LAPLACE — Since its inception in 1979, Ascension of Our Lord Church in LaPlace has promoted fellowship and friendship while... read more