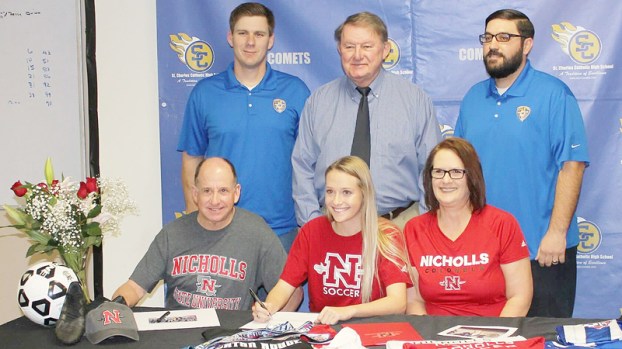 LAPLACE — The St. Charles Catholic girls soccer season started with a 0-8 record and a team riddled with injuries and ended with District honors following a formidable play-off run.

Senior Regan Duffourc took her love of the game to the next level Thursday afternoon when she signed onto the Nicholls State University women’s soccer team.

Despite a rough 2-9 loss against Isidore Newman in the Division IV regionals, bringing a premature end to the Lady Comets’ playoff run, Trepagnier is satisfied with how the season turned out and the team performed.

“A lot of our players who were injured earlier in the season started coming back, and once our chemistry got clicking, we started on a roll that led to a 10-game win streak,” Trepagnier said.

He’s most proud of the team’s resiliency, noting the girls kept their heads up despite having a -33 goal differential statistic and little hope for the playoffs at midseason.

To turn it around to an 11-11 record and a +7 goal differential was nothing short of incredible, Trepagnier said.

Despite five seniors exiting the team, Trepagnier has high hopes for a continued trend of success with younger players.

“We told the seniors after our last game that where the program is today wouldn’t have been possible without them,” Trepagnier said.

“The hard work they put in set us in the right direction. We’ve got a lot of people coming back, and I think we can be just as formidable a team for years to come.”

Trepagnier said Rainey and Kiersten Smith were the defensive stars of the season, creating a barrier very difficult for other teams to get past.

Midfielders Aaliyah Brumfield, Eden Simoneaux and Destiny Romious consistently took control of the ball, and forwards Duffourc and Anna Guidry always played their hearts out, according to Trepagnier.

Duffourc gave the team numerous good runs over the past five seasons, Trepagnier said, and he wishes her the best of luck at Nicholls State.

District honors are as follows: