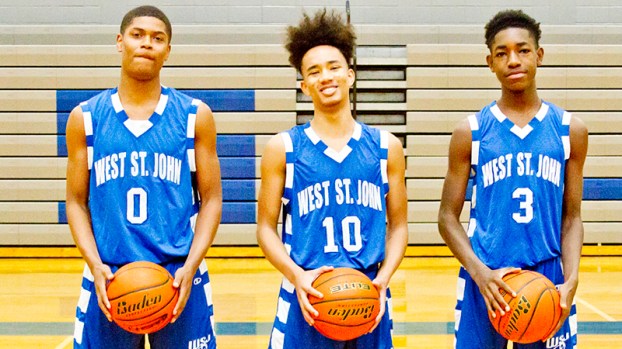 EDGARD — Alton Joseph feels his Rams can make a run in the playoffs if they finish the regular season with the same level of play shown in the previous three weeks.

“There’s been a lot of improvement over these past six games,” according to the West St. John basketball coach.

Entering the week 6-12, 2-2 in District, WSJH is showing potential for a late season comeback.

The early part of the season was fraught with challenging tournament match-ups against larger schools with more experienced players, Joseph said.

A late start following West St. John’s football championship forced the basketball team to play its first game against South Terrebonne with only one day of preparation.

By making the most of their talents, the Rams are producing what Joseph considers to be one of the school’s more successful seasons in recent years.

This year’s team is young, comprised of four freshmen, three sophomores, one junior and two seniors.

Joseph said it is a welcome change from the previous two years, when the team was dominated by seniors.

With younger boys, there is opportunity for growth.

“I finally have a young group that I can watch progress,” Joseph said. “I have a chance to bring them up so they can buy into the program and see what we are all about.”

During practice, the Rams work on ball handling, shooting and drills to encourage teamwork.

Over the course of the season, four players have established themselves as leaders.

Joseph said senior John Holmes is a great facilitator and the leading scorer on the team, averaging 19 points per game.

Team captain Jahmal Bailey, though only a freshman, has grown into a defensive powerhouse who often goes up against the other team’s best point guard.

“Jahmal gives it his all on the court,” Joseph said. “You can tell by his attitude that he’s buying into the program.”

Jerrod Jessie Jr. and Trenton Grow are tall and imposing sophomores, measuring at 6’1” and 6’3”, respectively.

Joseph described the young men as high energy and said they present a bright future for the team.

Jessie is counted on whenever the team needs a 3-point shooter, and Grow faces off against the biggest players on the opposing teams.

Joseph said the most memorable game of the season came against St. Martin Episcopal, starting off slow but ending in a 50-46 District victory.

When the team came to a huddle with a mission to turn the score around, Joseph saw drive in the boys’ eyes, recognizing it as a pure desire to win.

The Rams faceoff against Joseph S. Clark High at 6 p.m. Thursday at home and end regular season with a final home game against Varnado at 6 p.m. Tuesday.

The Tuesday game will double as senior night.