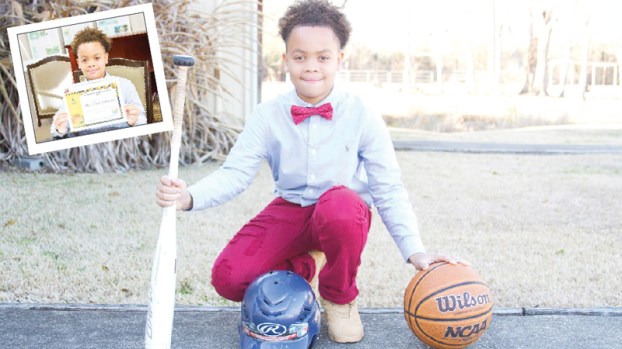 Ma’Chai Johnson is pictured with the sporting tools of his trades. The Garyville/Mt. Airy Math and Science Magnet student displays one of his academic honors in the photo top left. (Brooke Robichaux/L’OBSERVATEUR)

GARYVILLE — Ten-year-old Ma’Chai Johnson of LaPlace just wants to be a good kid.

To him, that means living to his fullest potential each day and making his family proud by excelling in school and sports.

“I don’t want to be the type of student who gets bad grades and just sits around and does nothing,” Ma’Chai said. “I feel that you have to be educated in order for you to succeed in life.”

Ma’Chai’s commitment to excellence began in kindergarten, when he was named class, grade level and District spelling bee champ and class and overall grade level winner in an oratorical contest.

Now a fifth grader at Garyville/Mt. Airy Math and Science Magnet, Ma’Chai is a principal’s list student and has upheld the tradition of advancing to the District level spelling bee each year.

Quiet and polite, Ma’Chai has a chance to shine on stage when he’s reciting poetry or spelling challenging vocabulary words. Yet, English isn’t his favorite subject.

Ma’Chai prefers math and science and has been recognized by Superintendent Kevin George twice for scoring above an 800 on the LEAP’s math section.

In third grade, he was promoted to a fourth grade math curriculum.

“I’m just like that in math,” Ma’Chai said with a quick snap and a smile. “With science, it’s fun because you can do all of the cool stuff like experiments and investigations.”

Ma’Chai said attending Garyville/Mt. Airy has furthered his education by providing a challenging curriculum and other opportunities.

He participates in Robotics and STEM Club, the latter of which involves demonstrating science experiments to students from various schools during STEM nights.

Ma’Chai also participates in Jr. Beta Club and recently competed in a team-building competition during a Donaldsonville convention.

His dedication to school has not gone unnoticed.

Ma’Chai has won Student of the Month, received a Student of the Year nomination, was named Student of Excellence for two years and is in the process of enrolling in the school’s gifted and talented program.

Ma’Chai’s mother, Lawanda Brown, is immensely proud of her son for accepting responsibility for his own education.

“He amazes me because I don’t have to tell him to do well in school or do his homework,” Brown said. “He’s the one telling me, ‘Mom, this is what I have to do, and this is what I want to do.’ I’m proud of him still if he makes a ‘B,’ but he would be disappointed in himself.”

She said Ma’Chai’s determination is one of his best traits.

“Although he likes sports and basketball, he knows that school comes first,” Brown said. “He’s just a lovable kid, always saying ‘I love you’ and telling me he’s going to make us proud.”

Basketball is a huge part of Ma’Chai’s life, and he dreams to one day make it to the NBA and follow in the footsteps of his role model, Stephen Curry.

Ma’Chai plays alongside older children on the sixth-to-eighth-grade basketball team. He said playing against larger and more experienced players has tested his skills, and the fast pace improves his game.

He also thoroughly enjoys playing baseball and has traveled to Florida to compete in travel ball world series games, earning a special ring when his team was named runner-up.

His father, Michael Dunn Jr., is a huge inspiration when it comes to sports and always dedicates time to help him practice.

Outside of school, Ma’Chai enjoys playing video and board games and spending time with his 6-year-old brother, Michael.

Ma’Chai said Michael is his best friend, making him want to set a good example.

“One day he looked at me and said, “Brother, I want to be just like you,” Ma’Chai said. “Now, I kind of teach him, and he follows in my footsteps.”