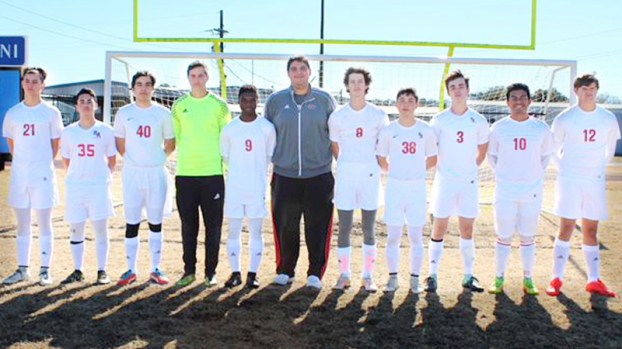 RESERVE — The Riverside Academy boys soccer team closed the season with a 5-1 win against Brighton during Tuesday’s Senior Night match, signaling a positive end to a challenging season.

Despite being underwhelmed by the team’s 3-14-4 record, head coach Ryan Zeller is pleased with how the boys held their heads high and conducted themselves with dignity on the field, even when the odds were stacked against them.

Byron Gilcrease, left, and Bobby Knowles were consistent players and major forces during the season. Knowles was a strong midfielder directly responsible for wins. Gilcrease was consistently praised by opposing coaches as an excellent goalkeeper.

“I definitely feel that we should have won a lot more games than we did, but I can’t say I’m not proud of how they played,” Zeller said. “No matter what the score was, they played the game as if it were tied every time.”

“It’s been a good class full of people who work hard, do what they’re supposed to and show up every day,” Zeller said.

Even though the season didn’t go the way the seniors hoped, Zeller said they have played a big part in building the program for future success. He anticipates more wins in future years with more seasoned players.

“This year, we lacked experience for sure,” Zeller said. “For a lot of our guys, it was their first or second year playing, and they took on big roles.”

Most of the games that ended in losses came down to a single penalty kick, Zeller said.

Throughout the season, he’s worked on building ball control during practice, emphasizing the importance of being quick enough to make contact before the other team.

Zeller recognized seniors Bobby Knowles and Byron Gilcrease as consistent players and major forces during the season, adding both young men will be very difficult to replace.

He described Knowles as a strong midfielder responsible for most of the team’s wins and ties against teams such as Ascension Christian and Lee Magnet.

“Bobby was a leader, and he came through whenever we needed him,” Zeller said.

Goalkeeper Byron Gilcrease came through for the team on several occasions, securing save after save despite having only two years of experience.

“I can’t say enough about him,” Zeller said. “Every game, coaches were coming up to me from the other side of the field to tell me how great he is; that he’s one of the best they’ve played against.”

Zeller’s hopes for the future involve continuing to build Riverside Academy’s soccer program until it becomes a state championship powerhouse comparable to the school’s basketball, baseball and football programs.

Building a team of younger athletes who can develop a love for soccer would go a long way to developing the program and building camaraderie, Zeller said.

LAPLACE — When a team member broke her foot between numbers in the midst of the American All-Star Louisiana State... read more