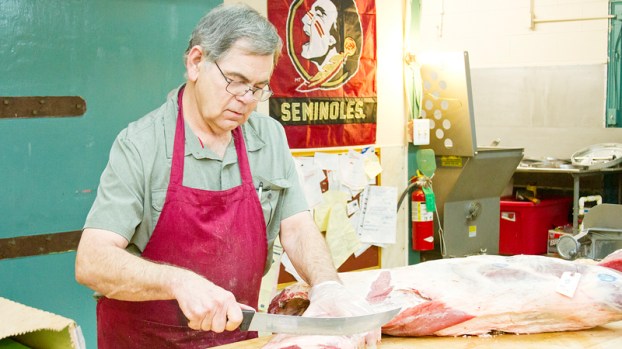 Cut Above For 85 Years: Cox’s Meat Market driven by three generations of passion

RESERVE — In the days when roads were dusty and unpaved, trucks from Cox’s Meat Market would drive from Garyville to St. Rose and deliver fresh-cut meat to River Region residents.

Located on River Road in Reserve, Cox’s Meat Market has proudly served the River Region and beyond for 85 years by adapting to changing times and culture.

Delivery services have stopped in recent years in favor of sending a single truck to the German Coast Farmer’s Market by Ormond Plantation on Saturday mornings. Laws and regulations have limited deliveries to big name restaurants across the state and the country, but it hasn’t stopped the business from finding success.

Instead, the customers come to them time and time again for unmatched quality and service.

Located on River Road in Reserve, Cox’s Meat Market is open from Monday through Saturday.

Cox’s Meat Market was established by the late John Cox in 1933 on family-owned land.

John’s son, Henry, started working at the store as a child in the late 1930s and eventually took over the business in 1957.

Livestock was slaughtered behind the family home and cut by hand in the butcher shop each morning. Early morning shoppers would line up outside of the small building, which was replaced by a slightly larger structure in the same location in 1964.

Henry said customers flocked to the store for its fresh meats and good, competitive prices.

Though meat is now purchased from Eunice, Henry said the quality of the shop’s signature Andouille and smoked meat has not decreased.

Rather, Cox’s Meat Market is one of few shops that still procures and sells grass-fed meat by the side and not in pre-butchered packages.

Upon retiring in 1992, Henry handed the reins to his son, Robert, who was initially nervous about taking on the responsibility.

It all turned out well in the end, and Robert said he was the only one of his siblings passionate enough about Cox’s Meat Market to make running the store a lifelong career.

Robert started working at the store as a child, took a full time position in 1970 and started running deliveries in 1972.

“I want nothing else. I’ve been around my dad and my grandpa and my family in the Meat Market probably since sixth or seventh grade.”

He said he’s truly in the business for the people.

“When I was on the road doing delivery service from Sunshine Bridge over to St. Rose, everybody was like family,” Robert said. “People would wait for you to come. It was part of life.”

The original building that housed Cox’s Meat Market was located directly next to the present location. The new store was built in 1964.

Robert misses making delivery runs, stating the decision to pull the trucks off the road was a financial necessity while his wife was battling cancer.

Airport runs to deliver to restaurants in Nevada, Texas, Pennsylvania and South Carolina were similarly halted. It was decided that restaurant owners needed to come to the store to make purchases, not the other way around.

Robert said the hindrances weren’t enough to break the store.

He loved delivering, but he also loves the precision involved in cutting meat.

Preserving generations-old practices and recipes is almost an art form, and Robert enjoys hearing testimonials from customers who see and taste the difference between Cox’s Meat Market cuts and what they might find at a typical grocery store.

Henry and Robert Cox are seen inside Cox’s Meat Market.

He said word-of-mouth has proved to be a powerful tool, attracting people from all walks of life all over the country to the unassuming little shop tucked away in Reserve.

“It’s a friendly atmosphere, and people come from all over,” Robert said.

“Anybody who had the product comes back. We still have restaurants fly in on holidays and fill up big golf bags with Andouille.”

In honor of the store’s 85th anniversary, Robert plans to hold food giveaways and raffles.