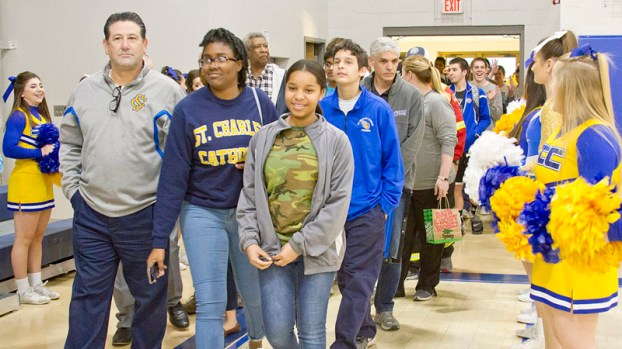 Students and alumni enter the gym for the first time immediately after the ribbon cutting.

Students, alumni, parents and staff were full of school spirit as they celebrated the unveiling of the gym and cheered on the boys and girls basketball teams Tuesday evening.

Athletic Director Frank Monica said it’s important for athletes to have pride in their facilities, noting a well-maintained home gym attracts crowds of support and projects a positive impression to visiting schools.

“You look good, you play good,” Monica said. “Part of our mantra here is with everything we do, we want it to be nice. When you show the public something, you want it to be first class.”

According to Dr. Courtney Millet, director of admissions, instruction and institutional development, arrangements were made over the summer for sports teams to use facilities at Regala Gym, St. Joan of Arc and Sacred Heart while the gym was under construction.

“Now that we’re back here, we can get our school spirit back at basketball games and volleyball games and be a true athletic program,” Monica said.

Boys basketball coach Kemper Todd said not having a home gym was a learning experience.

“The whole process tested us as a team,” Todd said. “We figured what doesn’t kill us makes us stronger.”

With a crowd of cheering fans seated in new bleachers, the girls team secured its first District win against Lusher Charter by a score of 49-23, while the boys came up short in a non-District battle with Vandebilt Catholic.

Monica said the gym boasts the school’s perception and reflects its interior values.

“We’re one of the best schools in the River Parishes, even South Louisiana,” Monica said. “What we have had inside has been remarkable. Now we can show a good façade, too.”