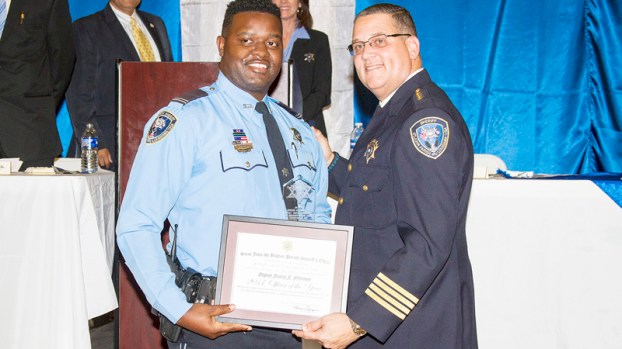 OFFICER OF THE YEAR: ‘I knew I had to save their lives’

That changed after he took a position at a juvenile facility in Houma and formed a bond with the people he worked to serve and protect.

“I grew a liking to it,” Williams said. “I became like a big brother to the kids, and it was like a gift from the Lord. Now I can’t see myself doing anything else besides this.”

Five years have passed since Williams found his calling at the St. John the Baptist Parish Sheriff’s Office, and he’s never looked back.

A heroic demonstration of bravery that saved the lives of a mother and her child in 2017 earned Williams the designation of Officer of the Year during an awards ceremony held Wednesday night in Reserve.

Williams was driving along Airline Highway in the early morning hours of Jan. 7, 2017, when he received a dispatch call regarding a vehicle that had plunged into a water-filled ditch.

Once he arrived on scene, instinct took over.

“I saw it was submerged, and it was extremely cold,” Williams said. “Dispatch had also advised an infant was in the water, so I just acted. I’m not a good swimmer, but I knew I had to save their lives.”

Before long, the baby was sitting in the backseat of his unit, warming up with the heater, as Williams took her mother into his arms and carried her to safety. Both mother and child left a life-threatening situation unharmed.

The courageous act earned Williams Officer of the First Quarter in 2017.

Officer of the Year, according to Sheriff Mike Tregre, was initiated five years ago to honor service and dedication in an often-hazardous line of duty.

Deputy Bernell Charles, Sgt. Staty Lewis and Deputy Michael Harris were also in the running for Officer of the Year, having been named officers of the second through fourth quarters in 2017.

Charles was selected for promoting community outreach by bringing the Citizen’s Academy program to St. John Parish, Lewis showed strength when injured in the line of duty and Harris utilized keen observation skills to arrest a dangerous subject.

“That decision to select one of the four to be Officer of the Year was not done by me, but I selected five members of the inaugural Citizens Academy to choose,” Tregre said.

He said each of the five Citizen’s Academy graduates heard the officers’ stories and privately voted for the one that resonated most with them.

One of the panel members with previous rescue operation experience in the St. John Office of Fire Services said it touched his heart to imagine Williams pulling an infant out of the submerged car, preserving an innocent life.

Tregre said he’s grateful to not have chosen between the four candidates but noted the dedication Williams has shown to the community is inspiring.

Williams said he appreciates Tregre, his supervisors and his unit for showing the same level of dedication.

His advice to others is to always keep God first and work hard for every accomplishment.

During the ceremony, officers of each month of 2017 and staff members with 25 or more years of service were recognized.

Crisis management and special operations were honored with the Unit Commendation Award.

(EDITOR’S NOTE: The above is the second in a four-part series examining crime in St. John the Baptist Parish and those working to make the community safer.)

RESERVE — Four adults and seven children are displaced from their homes following a fire that engulfed the upstairs bedroom... read more