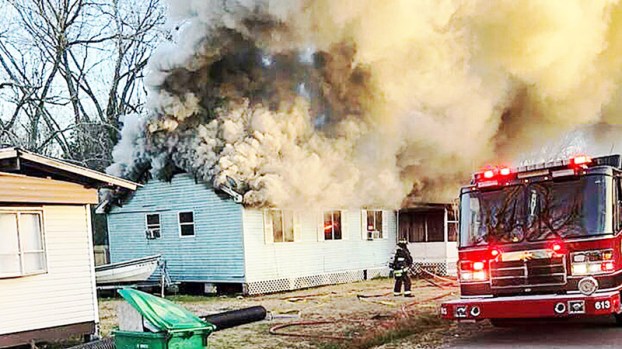 RESERVE — A family of eight is left without a home or personal belongings after being struck by a house fire Monday at 324 East 14th Street in Reserve.

Tamaneka Porter was at work on Monday when she received a dreaded call informing her a grease fire had erupted into flames, burning every room and crevice of her childhood home.

Her six children ranging in age from 18 months to 9 years old were in the home with Porter’s niece, who was babysitting at the time of the fire.

Though the structure is still standing, the fire resulted in a total loss of the home.

The St. John the Baptist Parish Office of Fire Services dispatched trucks to the address at 4:37 p.m., after being notified by neighbors of heavy smoke and fire coming from the top right side of the house.

The oldest child helped all occupants escape unharmed by the time Fire Services arrived on scene, according to Chief of Operations Cain Dufrene.

One dog was later saved from the backyard.

Upon arriving on scene, personnel took a defensive attack to fight the fully involved fire from the outside and stop flames from spreading further.

Dufrene said the fire was controlled within 40 minutes.

Though the structure is still standing, Dufrene said the fire resulted in a total loss of the home.

Dufrene reiterated the importance of remaining vigilant while cooking and learning the proper way to put out a grease fire.

He said water should never be used and only leads to an explosive reaction. To stop a grease fire, deprive it of oxygen by smothering it or douse it with plenty of baking soda.

Porter and her husband, Keith Andras, are shell-shocked from losing all they owned suddenly and without warning.

The house, which Porter grew up in, has housed the family of eight for the past three years.

As head of the family, Andras feels responsible for finding a new place to live as soon as possible.

In the meantime, the family is in need of support.

“To go from your kids having everything to having nothing has been absolutely stressful,” Porter said.

She said the family is most in need of children’s clothing items.

A gofundme page has been set up at the following web address: gofundme.com/z34yw-family-of-8-lost-everything-in-fire.