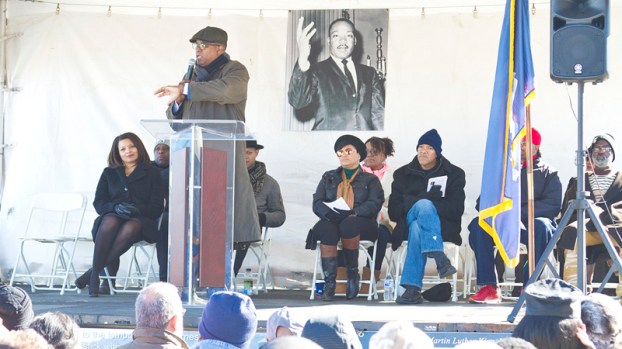 Domoine D. Rutledge speaks to the crowd in LaPlace Monday morning about upholding King’s legacy through service in the community.

LAPLACE — For many in St. John the Baptist Parish, Martin Luther King Jr. Day was not a time of celebration, but rather a day of observation.

In light of the charged atmosphere of race relations and the continued prevalence of poverty, crowds marching through the East and West Banks on Monday chose to commend King’s efforts with a mission to continue his movement.

Keynote speaker Domoine D. Rutledge delivered a speech inspired by Langston Hughes’ poem “Harlem” (“What Happens to a Dream Deferred”) outside of New Wine Christian Fellowship in LaPlace following the march on the East Bank.

Rutledge spoke about the vices of society, focusing on poverty, and advocated for a continued effort to promote equality through community service.

Crowds on the East Bank and West Bank, above, marched Monday in St. John the Baptist Parish.

“I am not comfortable saying today is a cause to celebrate,” Rutledge said.

“Rather, today is a day to observe the challenges that face far too many in the community. Louisiana ranks third in this country, with 20 percent of people living in poverty, and we know where there is poverty there is crime. Where there is poverty, there is malnutrition and a high exposure to disease.”

Dr. Martin Luther King’s campaign represented the unalienable rights of black people but also expanded to help others in need, according to Rutledge.

The election of former President Barack Obama was evidence of progress, Rutledge said, but the same country that produced a black president still sees an overpopulation of black men in prisons.

He told crowds to honor King by focusing on service at home and in the community and remembering to provide for the youth.

Ontranekia Nixon said the movement is far from over as she watched the march Monday morning alongside her two young sons. Within the past few years, she��s seen race relations take a step in the wrong direction.

“It’s starting to happen where a lot of black people feel as if they are being targeted again, as far as police brutality,” Nixon said.

She hopes people of all ethnicities come together in peace to build a brighter future for the youth.

“I’m raising two black boys,” Nixon said. “I’m a single parent, and I don’t want them to feel as if all these things they see on the news can happen to them. I want them to see, ‘If I can make a difference at this young age, anything could be possible.’”

They see a battle for racial equality in the country, though they also see the positives of having black representation in local leadership.

For black children, it’s inspiring to see becoming a parish president, sheriff or superintendent is within reach, Washington said.

A group of students performed on the West Bank Monday.

“We want children to know they can be anything they want to be if they keep focused,” Washington said.

“We’re here to keep the dream alive and teach our children to put God first.”

Several children were present for the event, including Brieanna Williams, Bronzy Williams and Parker Moore, who excitedly said they attend the march each year.

Bronzy said King “made the town a better place by stopping racism,” adding he feels safe, free and protected by good people in St. John Parish.

The West Bank Civic Association coordinated an Edgard march that extended from the library to West St. John Elementary, where a program and fellowship followed.

Luster’s speech focused on what strides have been made in racial equality and what needs to be done in terms of promoting education and public service, according to coordinator Madeline Jasmine-Bourgeois.

“This holiday is not just a day off,” Bourgeois said. “It’s a day of service and to keep Dr. King’s dream alive.”

Part of keeping the dream alive is teaching students the value of the educational opportunities they are provided, Bourgeois said, adding the West St. John High state champion football team and elementary and high school students were present.

The St. John the Baptist Parish Catholic Church confirmation group was also present, giving up a day off of school to serve.

RESERVE — School officials announced closures for Wednesday. In anticipation of wintry weather, all schools in the St. John the... read more