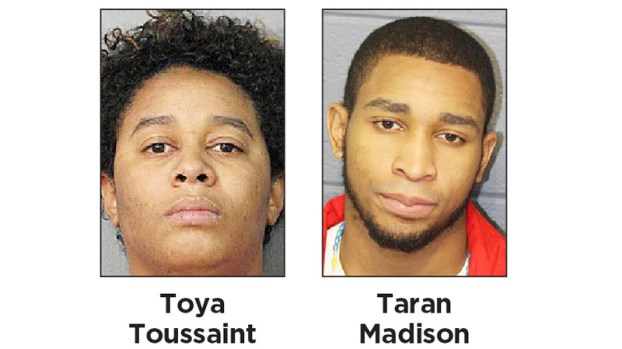 Toya Toussaint and Taran Madison were sentenced for their roles in the killing of Jonathan Toussaint.

LAPLACE — A mother and son were ordered to serve more than 30 years in jail between them for their roles in the violent shooting death of a LaPlace man, a case categorized by authorities as a domestic dispute that turned into a coordinated violent killing.

Judge Madeline Jasmine sentenced Toya Toussaint, 38, to 12 years with the Louisiana Department of Corrections for solicitation of murder.

According to the St. John the Baptist Parish Clerk of Court’s Office and prosecutors, Jasmine’s sentencing took into account that it was Toussaint’s first offense and an Alford plea provided from the defendant maintained her innocence but included accepting responsibility for her actions.

Toussaint was given credit for time served from July 18, 2013, to the present.

In a related court proceeding also on Dec. 28, Jasmine sentenced Taran Madison to 22 years with the Louisiana Department of Corrections for manslaughter.

According to the Clerk of Court’s Office, the charge was amended from second degree murder to manslaughter, and Jasmine’s sentencing took into account this was Madison’s first offense.

Madison’s sentence includes hard labor without the benefit of probation or suspension of sentence. He was given credit for all time served from July 10, 2013, to present.

Court records indicate Madison, 20, made a statement apologizing to the victim’s and his families and accepted responsibility for his actions.

Authorities identified the victim as Jonathan Toussaint, the estranged husband of Toya Toussaint and stepfather of Taran Madison.

Police said Jonathan Toussaint, 33, was shot to death in his house in the 1500 block of Ellerslie Avenue at approximately 1:30 a.m. July 10, 2013, while he was frantically seeking cover as four individuals invaded his home. According to police, Jonathan Toussaint was shot through the closet door several times, with the door opened and the victim shot again. Police also said shots fired during the attack exited the home and struck a neighbor’s residence.

Surveillance video from the scene was a key factor, according to police, in identifying suspects. Others arrested in the days following the killing included 18-year-old Jaleel Riley, 17-year-old Noron Spain and a juvenile.

According to the St. John the Baptist Parish District’s Attorney’s office, “to pursue the most culpable individuals, a decision was made by the District Attorney’s Office to grant immunity” to those three individuals.

District Attorney Bridget A. Dinvaut said the victim’s family participated in the prosecution.

“They were consulted, and we appreciate their commitment in this case because it did take a long time for us to get to a final disposition,” Dinvaut said.

According to Dinvaut, the case’s factual basis indicated Toya Toussaint influenced her son, Taran Madison, “into committing this murder.”

“The son and these other individuals actually participated in the murder of the victim, but (Taran Madison,) according to all the information from the other three individuals, actually shot his stepfather,” Dinvaut said. “Even though they were all in the house, there was some concern on our part because of the relationship between the friends.”

Dinvaut credited prosecutors for “an extraordinary job” seeking justice for victims in a case that presented numerous challenges.

RESERVE — In the early 1980s, Lawrence “Noonie” Triche sat amongst friends in a bar and realized the need for... read more