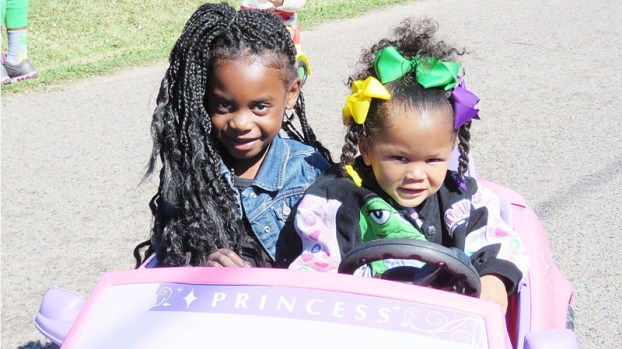 Jream Weber and Harlie Mason used their pink princess jeep in 2017 to get to the Krewe of Towahpasah Parade in Reserve.

RESERVE — In the early 1980s, Lawrence “Noonie” Triche sat amongst friends in a bar and realized the need for a family parade in Reserve for the community to enjoy without having to travel to New Orleans.

With help from family and friends, Triche worked diligently to see the first Krewe of Tohwahpahsah parade roll through Reserve in 1984.

Triche has since passed away, but his family has made it their mission to ensure the Krewe of Tohwahpahsah brings joy to residents for generations to come.

The Tohwahpahsah parade is seen in 2017 crossing the railroad track in Reserve.

However, community support is vital.

This year’s Krewe of Tohwahpahsah kicks off at noon Feb. 10 and makes a loop through Railroad Avenue and River Road, taking detours down W. Fourth, Annex, W. Second and W. First streets.

Krewe of Tohwahpahsah President Frances Triche Sullivan said her goal is to have 30 groups participate.

The entry fee is $25 for cars and $50 for floats, trucks and trailers. Registration is free for marching groups.

Golf carts, horses and four wheelers are not permitted due to insurance regulations.

Sullivan hopes to see the Krewe of Tohwahpahsah thrive because it is family fun for groups participating and residents who throw parade parties along the route.

“It’s something I grew up doing, and I just want to pass it on to the next generation like my father did,” Sullivan said. “We definitely need the community to come out and support the parade to keep it rolling.”

Treasurer Nikki Triche LeBouef said her favorite aspect of running the parade is sharing the family tradition with her children and seeing familiar faces in the community turn out year after year. It’s also a way to honor her father.

“It’s something that my dad put his time into all those years ago,” LeBouef said. “We want to keep on doing it because it’s something he loved.”

Tohwahpahsah is a term that has become part of Reserve’s culture, according to Sullivan.

The two regularly visited the bar to socialize, Sullivan said, often trading old war stories and speaking in Cajun phrases that have become less common through the years.

Cambre, involved with military intelligence work during World War I, obtained a letter detailing how Nazis would take over the world.

Wanting people to become aware, Cambre took a pen to the page and wrote “Tohwahpahsah,” his own spelling for a Cajun phrase translating to, “Don’t you see/ understand that?”

The word stuck with Cambre and eventually spread to his friends. When the Krewe was formed, Triche chose the name Tohwahpahsah, and it’s become well known in the community over time.

Like Krewe of Tohwahpahsah Parade on Facebook for updates and information on how to support the parade.

LAPLACE — In celebration of the life and contributions of Dr. Martin Luther King Jr., a host of festivities are... read more