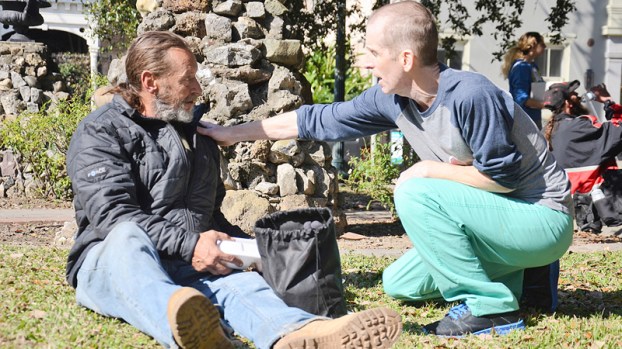 John Angotti, right, of LaPlace speaks with a New Orleans man on Christmas Eve during a family led project to feed and warm the homeless, which distributed 232 hot meals and 228 backpacks last week. (Photos by Brooke Watson)

NEW ORLEANS — The fifth annual Angotti “feed and warm the homeless” project culminated in the distribution of 232 hot meals and 228 backpacks of everyday necessities to the homeless population of New Orleans on Christmas Eve.

John and Jamie Angotti of LaPlace made the service project a family tradition to teach their daughters, Bella, 4; Berkley, 3; and Bevin, 10 months, about the value of giving back to the less fortunate.

It expanded from there as 22 volunteers turned out to help serve meals and distribute supplies, which included blankets, socks, gloves, hats, rain ponchos, protein snacks and canned meals, toiletries and first aid items.

The project was an overwhelming success, Jamie Angotti said. For the first time, there was enough food to feed everyone who showed up, and no one had to be turned away, she said.

Instead of running out of food, volunteers ended with leftovers that were donated to the New Orleans Mission and a family of seven that recently lost their home to a fire in Reserve.

Angotti said her family is overwhelmed with gratitude for the community response they received, from big and small donations to help with cooking, packaging and serving meals.

“We’re extraordinarily grateful,” Angotti said. “We are overwhelmed with the generosity and support. We couldn’t have done it without their time, support, donations.”

Brooke Watson was among the volunteers who helped pack supplies and prepare meals in the days leading up to the event. On Christmas Eve, she traveled to New Orleans with her husband, Fred; and children Eliana; Adeline; Alden and Evan to serve food and distribute backpacks.

Watson said the project’s success resulted from John’s and Jamie’s vision and an enormous degree of planning, focus and energy.

Coming from a background of Red Cross volunteer work, it was important to her that her young children could participate.

“The most memorable thing was watching our children serve and interact with people they might not get the chance to interact with otherwise,” Watson said.

“This was the first year we had children get super involved to the point of handing out backpacks,” she said.

“They talked to the homeless and didn’t seem fazed or scared. They were very involved and engaged.”

Angotti wants the community to be aware that the project will take place again in 2018.

She wants to start planning earlier, see the project grow and bring hope to others.

LAPLACE — Dedicated to supporting the people and organizations that make up the heart of St. John the Baptist Parish,... read more