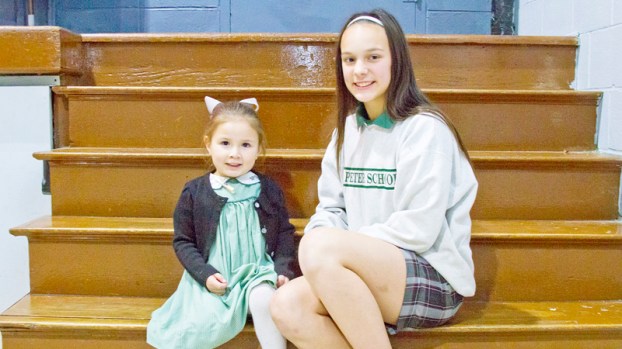 RESERVE — St. Peter Catholic School sixth grader Haley Scioneaux has a big heart and a passion for extending service to others.

Over the past couple of summers, Haley coordinated lemonade stand sales to raise money for charitable causes. This year, she donated $150 to the Greater New Orleans Therapeutic Riding Center in LaPlace, a non-profit providing horse-assisted therapy for individuals with physical, emotional and learning disabilities.

She was inspired to support the Riding Center after seeing one of her relatives benefit from its services.

In 2016, Haley donated her lemonade proceeds to a local animal shelter. As an animal lover and owner of a dog and guinea pig, the cause is important to her, and she’s volunteered time at the shelter to help with feedings.

Haley Scioneaux, seen standing on the St. Peter School stage, has been recognized as an outstanding cast member in her school’s drama club. She said she is ready to step into the spotlight with larger roles.

She plans to extend the lemonade project for years to come.

“This year, I’m thinking about doing a cancer charity,” Haley said. “There are more people every day coming up with cancer. We’re going to find one that really needs help.”

Haley’s service projects are a product of her own hard work and inspiration, according to Wendy Ilski, St. Peter Catholic School librarian.

“Haley does service projects outside of school that have nothing to do with St. Peter,” Ilski said. “These are things that she’s come up with on her own.”

“She helps everybody,” Nicholas said. “When we worked on projects, she’d help her classmates get the information they needed. She’s dedicated, that’s for sure.”

Nicholas said Haley’s friendly disposition shines through in her interaction with others.

“She’s nice to everybody,” Nicholas said. “She’d do anything for any of them.”

Haley arrives to school early each morning to help preschool teachers unload small children from cars, lead them into classrooms and get them settled and ready for the school day.

She also brings preschoolers to church services through a buddy system that partners older and younger students.

Inspired by her faith, Haley is involved with St. Peter Catholic Church, regularly volunteering time as an altar server and occasional reader.

She also participates in media club, where she takes photos around school and helps build the yearbook.

Haley’s favorite school activity, however, is participating in sports.

She’s on the St. Peter volleyball team and hopes to become involved with softball, which she’s played since she was 4.

“It’s nice having everybody cheer you on and having that special attention when you do something good,” Haley said.

“Winning is really fun, too.”

Haley enjoys drama club for the same reason, and Ilski said she’s won an award for being an outstanding cast member.

Haley has enjoyed smaller roles that allow her to help other cast members off-screen; however, she is eager to step into the spotlight with larger roles to entertain crowds.

Quiet yet personable, Haley said she loves to make other people laugh.

Though college is years away, Haley wants to pursue a career that will allow her to continue serving others. She can picture herself becoming a pediatrician or a children’s therapist.

Haley is the daughter of Hilary and Perry Jr. Scioneaux of Garyville.

Family devastated by fire still in need but grateful

RESERVE — A family devastated by a recent home fire in Reserve has seen an outpour of love from the... read more