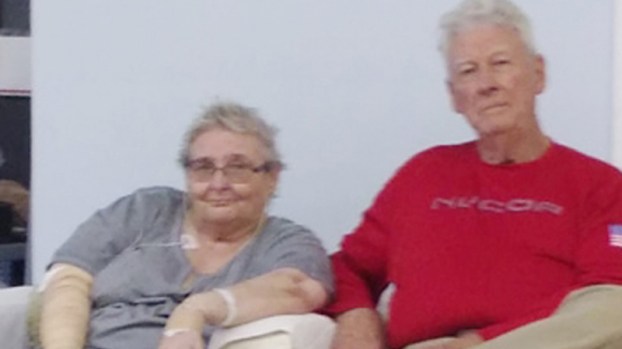 Judy, 77, and Jim Cogswell, 82, were displaced this month when a fire destroyed their Reserve home.

Family devastated by fire still in need but grateful

RESERVE — A family devastated by a recent home fire in Reserve has seen an outpour of love from the community, but continued support is needed to fund home reconstruction efforts.

The St. John the Baptist Parish Office of Fire Services responded to a fire Dec. 17 on Goshen Lane in Reserve, resulting in the total loss of a mobile home that Jim Cogswell, 82, and his wife, Judy, 77, have called home since 1998. Seven people were living in the home at the time of the fire, including two children, ages 4 and 5.

A mobile home on Goshen Lane in Reserve burns in the early morning hours Dec. 17.

Jim Cogswell said his family had an enjoyable Christmas despite the circumstances, and he’s endlessly grateful for the donations they received from the community.

“The people in St. John Parish have been pouring their hearts out,” Cogswell said. “The Parish, the people, the groups — it’s been overwhelming. I really want to give a thank you to all the people and let them know how grateful we are.”

Donated clothes and children’s toys have helped tremendously, but without a permanent home or finances to cover costs of rebuilding, the family is still in need of assistance.

Grandson Michael Hill Jr. is working tirelessly to help his grandparents, and he said money is the biggest priority.

“I hate to say it like that, but they are going to need money to rebuild,” Hill said, noting his elderly grandparents live on a fixed income and don’t have proper insurance.

Hill was raised in the home and recalls helping his father and grandfather dig the pond next to the house, build a fence around the yard and elevate the land that housed numerous chickens and dogs over the years.

He described his grandparents as loving, selfless people who would do anything for anybody.

Hill is selling plate lunches of jambalaya and white beans in Baton Rouge this weekend for a minimum donation of $10, and he said delivery options are available to St. John the Baptist Parish residents. For more information, call 228-546-1841.

Monetary donations can be directed to a disaster relief account at Capital One Bank under the name James H. Cogswell or online at gofundme.com/jim-and-judy-fire-relife.

Physical or monetary donations can also be dropped off to the Cogswell family at 2844 W. Airline Highway in LaPlace. Jim Cogswell can be reached at 985-212-0720.