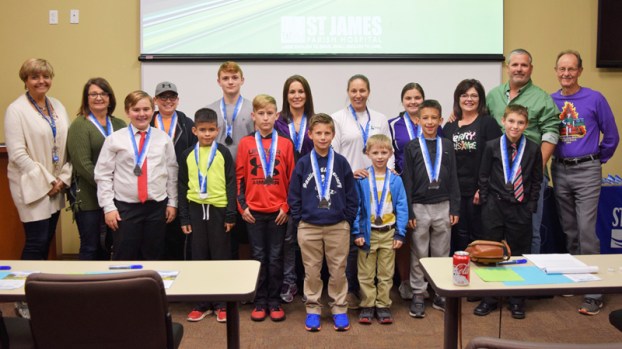 With the help of partners Chad and Susan Weidert, founders of the St. James Runners’ Club, the hospital awarded local children and parents who completed at least three of four parish races this fall. Each received a custom series medal commemorating their achievement.

At the ceremony, parents and children enjoyed a runners’ snack bar and were congratulated by hospital CEO Mary Ellen Pratt — also an avid runner — for their ongoing commitment to wellness and making exercise a family affair.

Hospital leaders also announced they were proud to expand the Run St. James Challenge to include ANYONE who completes at least three races in the series.

“With the help of Chad and Susan, we have sponsored this initiative for five years. The more medals we award, the better,” Director of Marketing Kassie Roussel said. “We started by awarding children. Then, recognizing the important role families play, began including parents. Now, we want to open up the challenge to everyone. Remaining active at any age is so important to our health and happiness.”

The hospital thanks the Weiderts for an invitation to collaborate and for their invaluable time mentoring and supporting parish youth.

The man believed responsible for a string of robberies last week in South Louisiana, including an armed conflict in Garyville,... read more