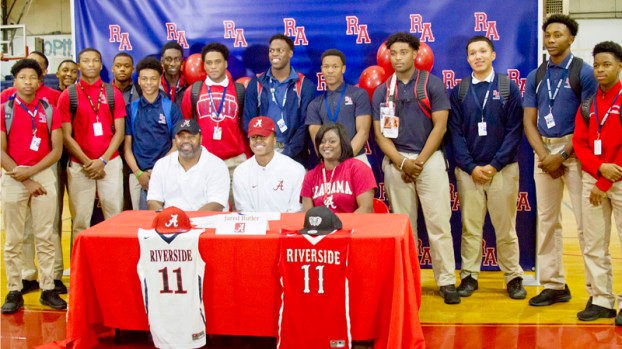 Riverside Academy basketball players surrounded teammate Jared Butler last month when the senior signed to play college basketball at the University of Alabama. Butler and his teammates aren’t ready to turn the page on this season, though, having jumped out to a fast start.

RESERVE — Riverside Academy boy’s basketball team members came into 2017-18 experienced and eager to redeem themselves after not reaching the finals last season — a rare omission in the past decade.

The Rebels are off to a strong start, earning a 12-0 record heading into this weekend because of hard-fought tournament victories over the past month.

That strong start earned the team a No. 2 national ranking by MaxPreps, based on wins and strength of schedule.

Head coach Timmy Byrd said the national recognition was nice but did not have a significant impact on the players who already strive for top performance.

“It’s a fun thing for us, but our kids don’t really care about it,” Byrd said. “They’re a mature bunch this year, and they’re focused on taking care of business.”

Jordan Loving, LeBoe Bridges, Jeremiah Bigham and Isaiah Bigham have made great strides in the development of their game, according to Byrd.

He attributes the team’s success to practice schedules, which started two weeks earlier this year, and the improvement of centers and forwards who have been in the program for years.

Of the top eight players this season, six are seniors, creating a different dynamic from last year, when only one senior was on the team.

“This year, we’re a mature team,” Byrd said. “It’s not nearly as difficult coaching when you have guys who have been in the system four or five years. If we stay away from injury and sickness, this team will have the chance to be one of our better teams.”

The expectation to uphold Riverside’s reputation as a high-performing team is another motivator, according to Byrd.

He said the Rebels basketball team has won five state championships in the past seven years and made it to the finals seven of the past eight years, making last year’s semifinal loss devastating.

“Not making it to the finals and not winning a state championship has really been a pain point for these guys, so I think it has motivated them to be more focused than usual and not to take things for granted,” Byrd said.

This year, Byrd isn’t changing tactics because he believes the players can hold their own.

While an older team serves as an advantage on the court, it comes with the reminder that the team will have to rebuild next year as the current seniors commit to college sports.

The Rebels are wrapping up a tournament at Metairie Park Country Day and will play at St. Thomas More next week.

RESERVE — Following a successful season culminating in a 30-12 record and advancement to the LHSAA volleyball quarterfinals, several Riverside... read more