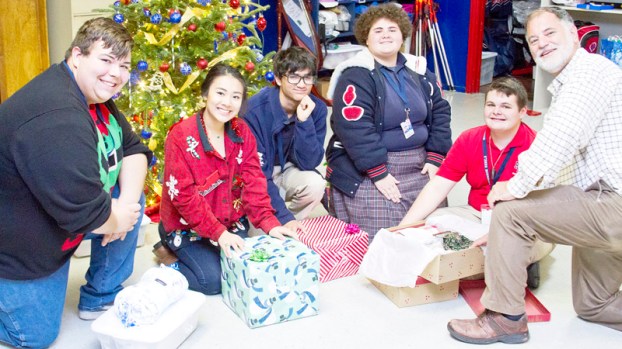 Approximately 160 boxes will be presented this Friday, one for each resident, and donations typically include socks, throw blankets, lotions, hygiene items, crossword puzzles and other small games to pass the time.

Band director Darryl Clement has assigned the project as a final exam for the past four years to teach students the value of giving back during the holiday season.

Each student created boxes and wrote personalized letters for two residents, and Clement said students have always been happy to create extra boxes when needed.

Upon entering the Southeast Louisiana Veterans Home, the RA band will put on a concert featuring Christmas music and football game medleys.

“They always enjoy it and sing along.”

He said music lifts the spirits of Veterans Home residents from all walks of life, and even those struggling cognitively tap their feet to the rhythm.

Following the concert, students in grades seventh through 12th present shoeboxes and spend time talking to the residents. Clement challenges students who are shy and nervous to ask the Veterans a few basic questions to open up a conversation.

“I tell them to do three things: Introduce themselves, ask them their name and ask them which branch of the military they were in. That’s usually enough to start a conversation,” Clement said.

Sophomore Cleo Dupre said speaking to residents and hearing their stories is a rewarding experience.

“Some residents light up like a Christmas tree after you ask them what they did, what war they fought in, what branch they’re from,” Dupre said.

“They’re so excited to hear that somebody wants to know what they did.”

Senior Adam Forsythe said the project allows him to step out of his comfort zone. According to Forsythe, community service is important at the high school level because it gives young people an opportunity to interact with others outside of campus.

“It allows you to branch out and connect with people and the rest of the world around you,” Forsythe said. “It’s really nice to give back.”

While residents get to enjoy music and have someone to talk to, young people get to develop and test their social skills.

Awasthi said he’s enjoyed getting to know the residents and asking them about their experiences, noting it’s important to hear accounts of individuals who have been underrepresented in history.

Clement was inspired to begin a partnership with the Veterans Home after Young Marines Unit Commander Brian Bertrand suggested the idea. In the years since, it has become an annual Riverside Academy tradition.

Others in the community have jumped in, according to Dupre, who said St. James Parish Hospital donated socks for the boxes, while local hotels have offered hygiene items such as lotion, hand sanitizer and shampoo.

Fire destroys home for family of 7

RESERVE — An elderly couple was taken to St. James Parish Hospital for minor burns while five other occupants were... read more