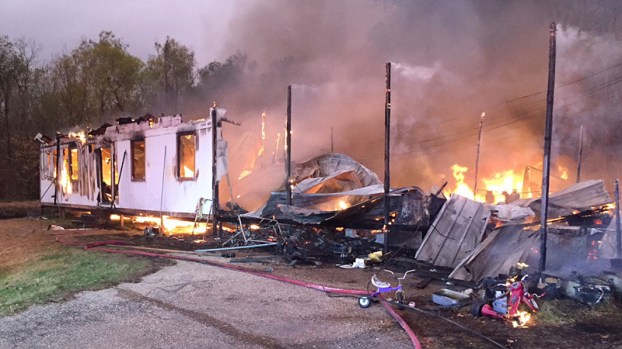 A mobile home on Goshen Lane in Reserve burns in the early morning hours Dec. 17.

Fire destroys home for family of 7

Ten units and 17 firefighters from the St. John the Baptist Parish Office of Fire Services responded to the structure fire at 6:10 a.m. While en route, personnel became aware of an elderly couple possibly trapped inside.

Personnel conducted a 360 survey upon arrival at 6:16 a.m. and located the couple in the back yard, trapped in the corner by a 5-foot high fence.

Authorities said the cause of Sunday’s fire in Reserve is unknown.

A downed power line blocking access to the home and an absence of fire hydrants on Goshen Lane complicated the rescue operation.

Chief of Operations Cain Dufrene said water was shuttled between fire engines until Entergy shut down the live wire, at which point personnel gained access to a nearby pond.

The elderly couple was rescued, and Acadian took them to the hospital with minor burn injuries. Red Cross assisted five other occupants who had previously escaped the structure.

The fire was under control by 7 a.m., and the scene was cleared at 9:55 a.m. Heavy flames resulted in the total loss of the mobile home, which totaled 2500 square feet including the porch and add-ons.

Chickens outside the home fell victim to the fire, and authorities said it is unknown if any pets perished inside. The cause of the fire is undetermined due to its severity, Dufrene said, adding a Christmas tree may be the culprit.

“One occupant reported he heard popping and saw smoke coming from a live Christmas tree on the porch before alerting others to exit the house,” Dufrene said.

According to Dufrene, the heavy Sunday morning rainfall ultimately helped the mission by cooling down burning metal.

“The fire threat has increased here in the past couple of weeks,” Dufrene said. “The weather has been colder than people are used to, so they have been using heaters.”

The American Red Cross in Louisiana responds to a house fire or other local disaster every six hours, and Roques said financial and mental health services are supplied to impacted families until insurance becomes available.

To support disaster services, visit redcross.org or text REDCROSS to 90999 to donate $10.