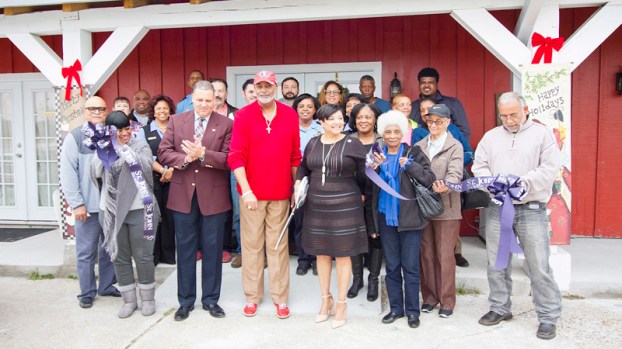 Colbert ‘Bot’ Clark, in red, leads a ribbon cutting at Bot’s Place on Airline Highway, joined by many supporters and friends.

Bot’s Place returns stronger than ever

LAPLACE — When Colbert “Bot” Clark received a call on April 1 claiming someone had driven a car through his business, Bot’s Place in LaPlace, he dismissed it as an April Fools prank.

After ignoring another call and accepting a third from the St. John the Baptist Parish Sheriff’s Office, he realized it wasn’t a joke.

Following a collision between two vehicles, a silver car crashed into Bot’s Place, a reception hall located at 2810 W. Airline Highway in LaPlace. The car plowed through the unoccupied building, breaking through a wall and knocking down two columns before coming to rest near the back of the building.

Clark said the wreck turned out to be a blessing in disguise.

Eight months later, the newly renovated Bot’s Place was officially unveiled to the community with a ribbon cutting on Thursday.

The hole in the wall resulting from the crash has been transformed into an elegant entryway, and the rest of the building has seen a complete overhaul.

Original wood flooring holding memories of countless events now lines the walls. Clark said the layout of the building has been flipped around to create additional space for guests to dance and socialize.

Since 2004, Bot’s Place has been a beloved rental venue for baby showers, bridal showers, private parties and weddings.

Clark started his business after using the building for a wake following the passing of one of his elementary school teachers.

Working with others has always been Clark’s motivation. Over the years, he’s enjoyed interacting with people in the community as they book the hall for events, whether they are happy celebrations or sad occasions.

“My love is for the people,” Clark said.

He said recent renovations meet the needs of the community.

“Everybody comes in here and says they like this building because it’s cozy,” Clark said.

The location’s homey atmosphere makes it the perfect location for intimate gatherings with family and friends, Clark said. He tells customers the building comfortably accommodates up to 150 guests but to invite 10 percent more than the target amount.

Good prices and security also set the reception hall apart from similar venues, according to Clark, who said every event involving alcohol is supervised by two uniformed deputies from the St. John Sheriff’s Office.

Deputy Stacey Millet has been a longtime friend and supporter of Clark, and she said Bot’s Place is an important part of the community because it gives people an area to socialize and gather for all of life’s major milestones.

“The way it is now is a tremendous turnaround,” Millet said. “When you walk into the place, you can feel the warmth and the evergreen smell.”

She said Clark is well known, describing him as “someone who will go beyond to help you with whatever it is that you may need.”

Clark’s service to the community is not limited to his work at Bot’s Place. In 2016, after a tornado damaged parts of LaPlace, Clark contacted Lance Oncale of BaBa’s Sports Bar and Grill and organized an effort to feed more than 1,000 impacted residents.

“It’s the community that keeps you in business,” Clark said.

“I live in St. James, but I grew up in St. John and this is where I work and pay taxes. It’s good to be in a small community and to talk with neighbors.”