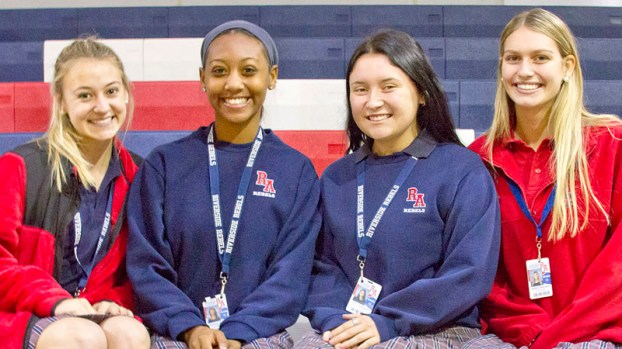 RESERVE — Following a successful season culminating in a 30-12 record and advancement to the LHSAA volleyball quarterfinals, several Riverside Academy players were recognized on 2017-18 All District teams.

Sydney Joseph, Briley Becker, Abby Bourgeois and Kate St. Pierre made first team, and the designation was determined by their stats and performance during the season.

Head Coach Brandi Melancon was named coach of the year, a designation she attributed to the team’s performance.

“It’s a great honor to be named Coach of the Year, especially my first year in the district,” Melancon said. “Our team earned the honor for me. Coaching changes can be terrifying, especially to a group of seniors who have high expectations for their season. They really embraced our new coaching staff and the culture we are creating in our athletic program.”

First team member Joseph also won the title of MVP and was recently named a Louisiana All State volleyball player.

Throughout the season, Joseph was a top performer on the Lady Rebels team, always leading by example with consistent and competitive gameplay, according to Melancon.

Joseph said she was initially nervous about joining the volleyball team as an eighth grader four years ago, but those inhibitions are far in the past. Now a graduating senior, Joseph is hoping for a volleyball scholarship and plans to continue pursuing the sport while she studies psychology in college.

“It became the love of my life,” Joseph said.

Her most memorable moment of the season was bonding with teammates at LSU camp.

“LSU camp is where it all started,” Joseph said. “We worked our butts off playing volleyball the whole day, and the way we reacted to it showed who we were going to be throughout the season.”

First team member and setter Abby Bourgeois said making it to the Pontchartrain Center for the third time during her high school career was her favorite part of the season.

“It was probably one of the happiest moments of my life, knowing I made it my senior year with my team,” Bourgeois said. “The sport brings out the best in you. I love how we always come together after every point and the character everyone has on the team.”

Also in District IV, St. Charles Catholic High was recognized for making it to playoffs and overcoming a series of challenges presented by ongoing school construction, notably the absence of a home gym and limited practice times.

With stats totaling 144 kills, two assists, 131 digs, 83 aces and three blocks, Mohon played her heart out this season and was one of nine seniors who carried the team to playoffs.

“Our season didn’t come out with a winning record, but we overcame a lot, having time limits on our practices and a lot of challenges to work through,” Mohon said.

“I’m really proud of the team and how we overcame it. Where we played wasn’t important; it’s how we played.”

Mohon has been playing volleyball since she was 9 years old. She said her favorite aspect of the game is its intensity.

Mohon and Jade Brady from St. Charles Catholic and Troynisha Gerard from East St. John High were recognized for having a 4.0.