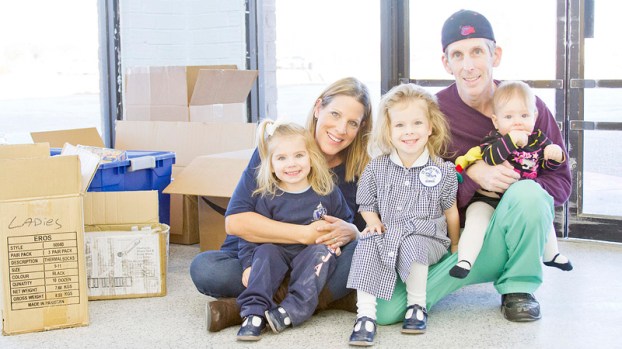 LAPLACE — For the fifth year in a row, the Angotti family of LaPlace will spend Christmas Eve in New Orleans to give the homeless a gift of hope in the form of a hot meal and everyday necessities.

“We’re feeding their bellies and their hearts,” Jamie Angotti said. “That one moment can change their outlook on everything and encourage them to keep going. It’s a gift of hope; it’s hope that there’s somebody who cares.”

John and Jamie Angotti have made the “feed and warm the homeless” project a tradition to teach their daughters, Bella, 4; Berkley, 3; and Bevin, 10 months, about the importance of community service.

Believing community service should start in the high chair, John and Jamie Angotti decided to set a positive example for Bella, who was only 10 months old for the family’s first community service project in 2013.

People line up in New Orleans during last year’s feed and warm the homeless event. The service project began in 2013 and has grown since.

The first year, the family fed 75 homeless people in New Orleans but left feeling dismayed after running out of food and having to turn away more than 100 others.

Deciding to remain positive, John told his wife they could plan bigger and impact more people next time, and the project eventually expanded to provide more necessities for the homeless.

Each year, the Angotti family purchases backpacks, hats and gloves for 200 people. Other items are collected with the support of the community.

Blankets are the biggest need, according to Angotti. As of Tuesday, more than 160 additional blankets were needed to reach the goal of 200.

Monetary donations are also being accepted.

Bella and Berkley Angotti help pack donations. Parents John and Jamie began the service project to teach their children the importance of giving back.

Donations can be dropped off at Angotti’s business, Buttons & Bows, located at 2021 West Airline Highway in LaPlace, or at the Angotti residence, 2112 Augusta Drive in LaPlace until Dec. 20.

St. Charles Catholic High School senior Ethan Nelson, his mother, Wendy, and siblings Ellie and Tank are helping the cause by reaching out to local schools to collect items for the backpacks.

Along with his siblings, Nelson operates E&E Services and performs odd jobs and community service initiatives to pay for his Catholic school education.

“This is the biggest project I’ve been a part of, but I’ve always helped out in the St. Peter and SCC communities,” Nelson said. “The most rewarding parts are the smiles on people’s faces and the ‘thank yous’ I get.”

St. Charles Catholic senior Ethan Nelson of E&E Services is helping the cause by reaching out to local schools to collect items for the backpacks, which will be given away to the less fortunate in conjunction with the feeding effort.

Jamie Angotti is happy young people are getting involved, believing youth have the power to change the world.

She sees the possibility of change in her children’s eyes. Now almost 5 years old, Bella keeps her parents on their toes with community service reminders, sometimes adding her own ideas.

Last year, upon seeing representatives from the St. John Parish Office of Fire Services had to work on Christmas Day, Bella told her family they needed to help out by feeding them, too.

Jamie Angotti said Bella has taught her sister, Berkley, that giving is better than receiving, and the two help sort through donated items without complaint.

The family will serve food and hand out backpacks outside of the New Orleans Mission at the corner of Clio Street and Oretha Castle Haley Blvd.

Jamie Angotti said she will never turn a volunteer down, and those who wish to participate are welcome to join in and socialize.