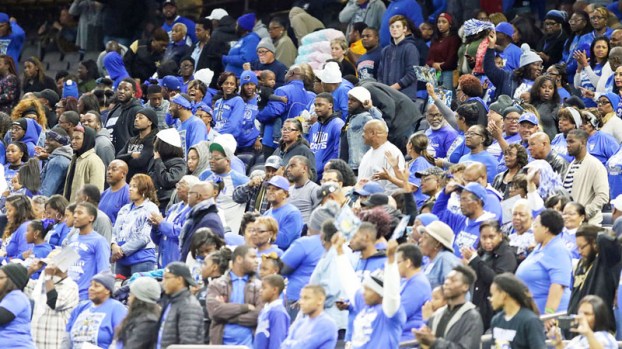 The West St. John faithful come out in full support of their team during the LHSAA Class 1A state football championship game at the Mercedes-Benz Superdome in New Orleans on Thursday, December 7, 2017. (Photo by Peter G. Forest)

It was during that stretch that Rams defenders Trenton Grow and D’Kyri Jackson intercepted passes to seal a 20-14 WSJH victory.

It also sealed a bond that had been building for years.

The West St. John Rams coaching and support staff all pose for a group photo after defeating the Kentwood Kangaroos 20-14 in the LHSAA Class 1A state football championship game. (Photo by Peter G. Forest)

“You have to trust your kids,” Walters said. “That’s what you get out of it. You trust each other, learn to believe in each other and stick with what you do.”

When the last interception was corralled, that was the time Walters could share the victory with Rams fans in the Superdome.

It was those fans, many from the West Bank, who turned the Class 1A state championship at the Allstate Sugar Bowl LHSAA Prep Classic into a greater Edgard party.

“When I knew we had it in the bag after that last interception, I turned around and saw a sea of blue in the stands,” Walters said. “Everybody was so excited, happy and proud. It’s a great feeling to be one of the guys who has brought that to this community. I hope to bring many more.”

Walters’ journey as the lead man began in July 2015 following the unexpected departure of then coach Robert Valdez. He was first named interim head coach and athletic director before earning the titles fulltime following that season.

It was during that time that St. John the Baptist Parish Public Schools Superintendent Kevin George said he was looking for someone who understood West St. John’s tradition, community and expectations.

According to George, Walters embodied those traits and benefited from his experience as a longtime staff member under coaches Valdez and Laury Dupont.

“We knew we had the right guy, but it’s always a learning process,” George said. “We didn’t see the results in terms of wins and loses (the first two years) but you saw the results in terms of a process and what he was building. I have seen him evolve in three short years. You don’t win the state championship without learning, growing, knowing what to say and who to say it to. It has been great watching him grow as a coach and leader of young men.”

George, who was on the field after the state championship victory, said the feeling among the West St. John High community was unbelievable.

“The image that burns in my mind is looking in the stands and seeing people cry, from parents to community members,” George said. “They were just so happy for what this team, coaches and community have been able to accomplish. I have said it a million times since I have been here, West St. John is truly a community school. Everyone supports it. Everyone wants to see it do great things.”

There is no denying West St. John High is a family, but Walters said he was especially proud to share the state championship experience with his immediate family, many of whom are longtime Rams contributors.

The ties go beyond that.

“My wife (Rosalind) has done so much,” Walters said. “She helps tremendously with preparation and keeping everything going. It’s a pleasure to have my entire family around because there is so much time you put into this. I just wish I could have had the opportunity to win this with my sons (playing), but I was glad they were there to see it. We’ve been talking state championship for the last three years. We knew we had the kids to do it. We just had to get out there, work and execute.”