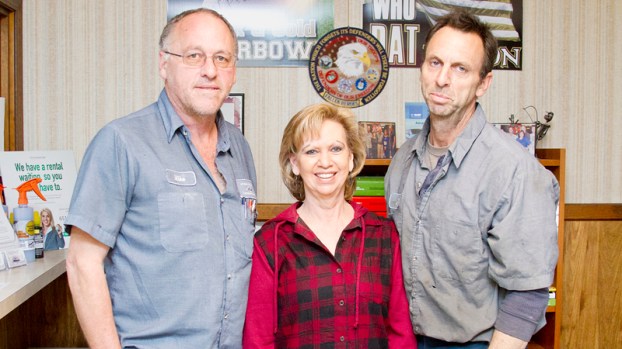 After high school, they tried their hands at different careers but were eventually drawn back to Jim’s Body Shop, where they now work as a team, providing auto body repair services to the River Parishes.

Located at 1016 Bert St. in LaPlace, Jim’s Body Shop offers complete collision repair and, according to company leaders, is the only body shop in the region providing high quality ceramic coatings for cars to protect paint from hail, acid rain and other forces of nature.

Located at 1016 Bert St. in LaPlace, Jim’s Body Shop was established in 1975 by Jim Watson. The shop offers complete collision repair services to the River Parishes.

Mike recalls his father having a dream to open his own body shop long before its official opening in 1975. With little money to work with, Jim Watson made deals on equipment with handshakes and a promise to pay once he could afford it.

“He’d look them in the eye and say, ‘I don’t have the money, but I’m going to pay you,’” Mike said. “He honored all his handshake deals.”

Mike spent weekends with his dad at the shop as a child, watching him work and picking up lessons but never being allowed to take part in what truly fascinated him: paint work.

Following stints working in the fire extinguisher business and inspecting ships, Mike quit his job and offered to work at the family business for a couple of weeks.

“Daddy saw an opportunity to throw a hook in me,” Mike said. “He knew I had a fascination with painting and offered to let me paint the inside of the door, then a fender.”

After his father handed over the reins and allowed him to paint a van, Mike wasn’t going anywhere.

Mike Watson sands the hood of a vehicle Thursday morning at Jim’s Body Shop in LaPlace. Company leaders said they are the only body shop in the region providing high quality ceramic coating for cars to protect paint from hail, acid rain and other forces of nature.

“He said I had a natural talent,” Mike said, noting he went on to become certified as a master painter.

Today, Mike manages everything in the office from operations to insurance dealings, working alongside his brother, James, and sister, secretary Sandy Tamplain.

James said he is primarily interested in fabrication and “heavy, heavy collision repair.”

After buying a racecar and moving out of his parents’ house at age 19, James looked for other work, eager to explore options outside of working for his father.

He ended up working in Paradis with his cousin, Zeke, who gave him the go-ahead to work on major-collision repair without fear of causing damage that couldn’t be fixed.

According to James, his dad inquired about who was doing the work in Paradis and was shocked by his son’s expertise. The two had a conversation acknowledging the student had become the teacher, and James has worked at Jim’s Body Shop ever since.

He said his father worked hard to ensure the business was financially taken care of and his children were experienced enough not to need his guidance before retiring unceremoniously 10 years ago with a sign reading “Gone fishing, see ya.”

James doesn’t like being referred to as a boss, instead considering himself one of the boys who work in the shop and focusing on building others up rather than dishing out criticism.

Today, Jim’s Body Shop has a small but dedicated staff, and James recognized painter Guillermo Gutierrez as being a particularly great worker.

Mark Hammond and Mike Watson review one of the vans in their shop.

The business stands out from others in the area with years of experience, attention to detail, quality welding equipment and dedication to safety, according to Mike.

He said an understanding of chemistry and paint distinguishes the business from detail shops, and former customers have responded positively to services.

“Those that meet us really like us, and we have a ridiculous amount of repeat customers,” Mike said.

“We’re the oldest and most established body shop in the River Parishes. We make a crash experience as good as it can be. Customers feel comfortable knowing we will fight for everything they need without cutting corners.”

With a performance score of 949 out of 1000, the business was recently rated by State Farm in the top 4 percent of body shops in the nation.