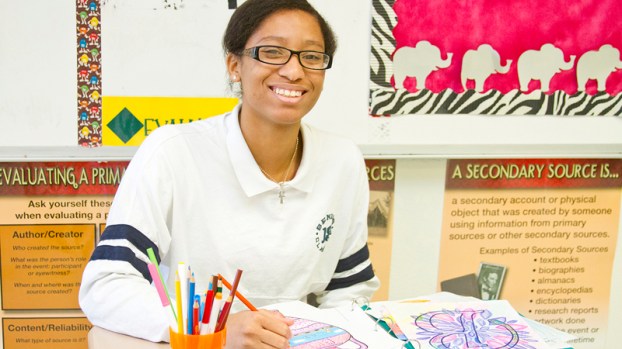 EDGARD — West St. John High School senior Briana Grayman shies away from the spotlight, not one to brag about her long list of accomplishments.

She’s one of the front-runners for valedictorian of her graduating class with a 4.0 grade point average and an ACT score of 27, demonstrating a dedication to academics.

Grayman has made her mark through leadership positions in student organizations.

Grayman is also vice president of National Art Honor Society, representing one of her favorite subjects in school.

She loves art of all forms, especially pencil sketching, and she’s enjoyed designing for Celebration in the Oaks and painting a mural for the softball team with club members.

Last year, Grayman was asked to be a LOFSA Trailblazer Leadership Program member to motivate peers to apply to college and assist with filling out FAFSA forms.

She’s participated in BETA and volunteered as a football trainer when her older brothers were on the team.

Out of all her extracurricular activities, Grayman has most enjoyed planning activities for her classmates because it gives her an opportunity to have her voice heard.

“I’d say being class vice president is my favorite,” Grayman said. “I like having a role in it and having a say in what we decide to do.”

Administrators and teachers describe her as well rounded and self-motivated.

While preparing for literary rally, Grayman asked her fine arts teacher, Deanna Larmeu, for textbooks and a copy of the state curriculum to study independently.

“She studied everything, all on her own without being asked and placed first in district,” Larmeu said. “She’s a very hard worker. She’s fantastic.”

Larmeu has known Grayman since she was an eighth grader, and the two have formed a bond in the years since.

As a fine arts teacher, Larmeu has seen the passion Grayman has toward the arts. However, she noted Grayman’s strengths are not confined to one area.

“She’s not only inclined to the arts, but she’s talented in all the other subjects, too,” Larmeu said. “She probably has the highest GPA in every class.”

Principal Claude Hill Jr. described Grayman as a fantastic student, driven and willing to be successful. He said Grayman deserves recognition for her accomplishments, even if she is too humble to bring attention to herself.

Grayman describes herself as a child at heart, but with enough maturity to stay focused on school and build a path for herself.

Laughing, she added, “Not really with threats. I’ll just do it on my own either way, but they do motivate and encourage me to do well because we’re going to need it [scholarship opportunities].”

Grayman talked about the importance of applying for scholarships to afford college and help her family financially.

She’s in the process of applying for financial aid and plans to attend Southeastern Louisiana University next fall, where she will major in mechanical engineering.

The positive economic outlook for the engineering field drew her to the subject, and she learned more about local industry opportunities at a career fair held in October at the Norris J. Millet Sr. Library in LaPlace.

“I’m looking forward to being able to build things, put things together and find out how they work,” Grayman said.

Outside of school, Grayman enjoys reading, listening to music and spending time with her 11-year-old sister.