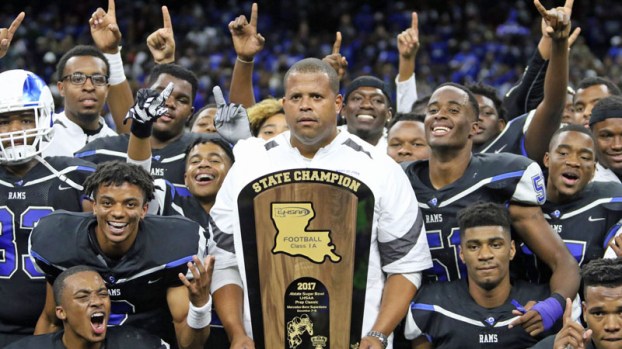 NEW ORLEANS — Every day, West St. John High School football coach Brandon Walters has to make a 45-minute commute from his home in Harvey to his job in Edgard.

Thursday, his job took him only a few minutes from his home in Harvey to the Mercedes-Benz Superdome, then his team went to work.

With a stifling defense that nabbed four interceptions, West St. John took a 20-14 victory over Kentwood to win the Class 1A state championship at the Allstate Sugar Bowl LHSAA Prep Classic. It is the Rams’ sixth state title overall and its first since 2004.

As he has so many times this season, Walters put the outcome of Thursday’s game in the hands of his defense. Well, they kind of made him.

After stalling on what they thought would be the final possession of the game, the Rams had to punt with 1:30 remaining in the game.

Walters said his defensive players asked for the chance to win the game.

“‘Coach, we’re going to punt the ball and play defense,’” Walters recounted. “I’m like, ‘Hold on, man.’ They asked me to give it back to them. ‘Coach, one more stop. Coach, we got this.’”

With 13 seconds remaining, Kentwood had third-and-7 at the Rams 36-yard line when West St. John’s D’Kyri Jackson intercepted a desperation pass by Kentwood quarterback Larenz Morris at the goal line to seal the win and begin a raucous celebration on the Rams’ sideline.

Walters said the sequence might have taken a few years off him.

“It’s definitely a gut check thing, a heart-check thing,” he said. “I’m glad the guys stood up. We did what they asked me to do and we’re champions now. Those games, they check your heart. It’s amazing for the fans, but it’s tough being on the sidelines and going through it.”

Jackson’s interception was the fourth of the game for the Rams. Niko Roy had the first one, stopping No. 3 Kentwood’s first drive with a 30-yard return to the Kangaroos’ 4. Three plays later, Kylan Duhe ran around the right end for a 3-yard touchdown just 1:36 into the game.

Covan Barnes had the second one, which he returned for a 46-yard touchdown with 8:15 remaining in the first half to give the Rams a 13-7 lead. Trenton Grow intercepted Morris in the end zone with 2:01 remaining in the game.

Morris, who was named Outstanding Player for Kentwood, finished with 102 passing yards amd was 8-of 26. He also rushed for 100 yards. He threw a 9-yard touchdown pass to Radarrian Robbins to tie the game at 7 with 10:50 remaining in the first half. He connected with Trey Palmer for a 16-yard touchdown with 5:13 remaining in the third quarter.

The Kangaroos had a pretty solid defense as well. West St. John quarterback D’Andre Gaudia was 1-of-6 for 21 yards with one interception, but the Rams rushed for 203 yards.

Duhe was the workhorse, rushing for 120 yards and two touchdowns on 29 carries. He earned West St. John’s Outstanding Player Award.

Kentwood coach Jonathan Foster said his team just made too many mistakes. Besides the turnovers, the Kangaroos had 18 penalties for 95 yards, including way-to-many offside and illegal procedure calls.

“We were just too sloppy,” Foster said.

Walters, who was a West St. John assistant coach in 2007 and 2011 when the Rams finished as state runners-up and is surrounded by former players who have rings, finally got his first as a head coach.

“It’s special,” he said. “I’m glad for the opportunity for these guys.

EDGARD — The Rams have won nine straight games, a streak that dates back to a 61-6 Sept. 29 victory... read more