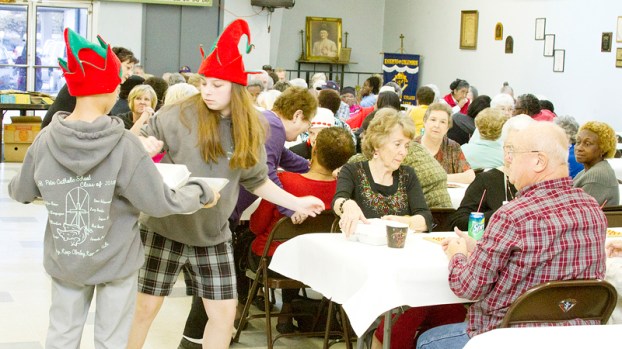 Knights of Columbus Council 2436 gives back with senior citizens luncheon

After a lot of prayers, donations roll in like clockwork every year, allowing seniors of St. John the Baptist Parish a joyous afternoon of great food, bingo and reconnecting with old friends.

This year’s Knights of Columbus senior citizens luncheon was held Friday at the KC Hall near St. Peter Church and drew a crowd of approximately 300 people.

Cashio has headed the project for 31 years, and he enjoys serving the community.

“I love people so much, it’s unbelievable,” Cashio said.

“It’s all about giving them one great day a year they’ll always remember. It makes no difference if they’re black or white; all colors and creeds are here together. That’s what I love about it.”

Seniors enjoy the event, according to Cashio, who said he’s seen familiar faces return every year for decades.

Jerry Jacob, Kenny and Theresa Lambert and Jeanette Tregre are among those who return year after year.

“We enjoy it so much because it’s about gathering with friends,” Theresa Lambert said. “We thank Burt so much, and we want to thank everyone involved for their hard work.”

Kenny Lambert said the annual luncheon is a day to reconnect with old classmates and neighbors from Reserve. He sat across from Jacob, who he served with in the United States Marine Corps at age 18.

Jeanette Tregre said she loves the home cooked food, which has been prepared by Knights of Columbus member Randy Aucoin for more than 30 years.

“The food is delicious and the people are so homey,” Tregre said. “I always look forward to it.”

During bingo, 70 lucky attendees won door prizes, many of which were funded or donated by local people and businesses that consistently support the event. Some gift card donations were given in memory of family members who enjoyed the annual luncheon, according to Cashio.

“People come through, and we usually end up collecting about $2,500,” Cashio said. “Without the support, we couldn’t continue to do this.”

St. John the Baptist Parish Judge J. Sterling Snowdy donates every year to support the Knights of Columbus’s effort to carry on a long-standing tradition that, unfortunately, is becoming less prevalent across the country.

Knights of Columbus Council 2436 collects money year-round during bingo nights. Bingo money, community donations and other fundraisers allow the organization to give $18,000 a year to go to local churches, schools and residents in need, according to Cashio.

Cashio said food basket giveaways take place each year during Thanksgiving and Christmas holidays and at the beginning of the summer, and organizers ensure the food goes to those who are truly in need.

The organization also makes monthly donations to the St. John Ministry of Care in LaPlace to provide for St. John Parish residents.

Supporting students at local schools is another Knight of Columbus initiative. The group has given $500 scholarships to students graduating from St. Peter School in Reserve and St. Charles Catholic in LaPlace.

Knights of Columbus Council 2436 meetings are held once a month on Thursdays. During this time, members fellowship over a nice meal before planning activities for the upcoming month.

Though Knights of Columbus is a men’s Catholic service organization, Cashio said the women are involved in quarterly meetings and provide outstanding service to benefit the organization.

“If the women can’t be involved, I don’t want to be involved,” Cashio said. “They help us tremendously with bake sales and fundraisers. I can’t thank my wife enough for setting this up today.”

RESERVE — A tip from the community led to the overnight Friday apprehension and arrest of a St. John Parish... read more