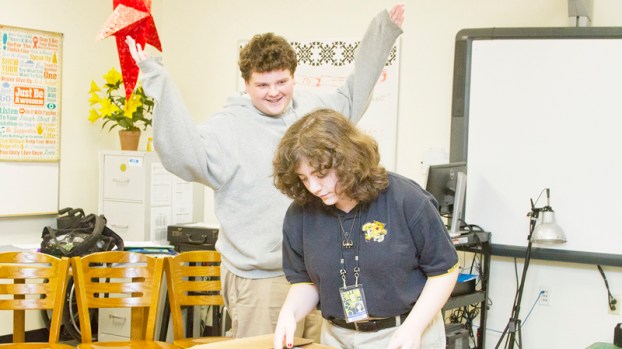 Neill Pierce and Savannah Donaldson rehearse ‘The Door’ ahead of their performance, under the direction of fellow East St. John High student Shania Campbell. The shows are open to the public at 7:30 p.m. Dec. 15-16.

The community is invited to survey their progress during a night of entertainment featuring the Talented Theatre 1 class revue show and senior Shania Campbell’s directing project at 7:30 p.m. Dec. 15-16 at the ESJH Media Center.

Campbell will be presenting “The Door” by Paul Elliot as part of the requirements for her Talented Theatre 4 class. As director, she picked source material that inspired her and worked all semester to bring her creative vision to life.

Part of her job involves directing actors Savannah Donaldson and Neill Pierce to help them better understand the script and the roles they play as characters.

Neill Pierce and Savannah Donaldson star in ‘The Door,’ which opens this month to the public.

“The Door” tells the story of a grandmother who closes herself off in a darkened apartment, unwilling to answer the persistent knocking on her front door and face the truth that lies on the other side. All the while her teenage grandson encourages her to stop hiding away.

“I’m new to directing, so we all look to each other and figure it out together,” Campbell said.

“I’ve learned something new, and I think it’s also helped my acting. I’ve been on the acting side for so long and now I’m on the other side, so I feel like I have more insight to the art itself.”

Pierce, who plays Justin in the play, sees it as a way to break out of his shell.

“Being in a performance forces you to put yourself out there, and it lets people see more of you than they would see regularly,” Pierce said.

Talented Theatre instructor Garrett Prejean is excited to see “The Door” because he’s watched Campbell grow as an artist over the past four years.

“One of the things that we want to do in the program is really give our students the space to find their own voice as an artist and a human,” Prejean said.

“We give them the chance to express and share how they feel about the world we live in today and also how to best communicate what that is.”

He’s worked on improv with his Talented Theatre 1 class, encouraging them to focus on their gut feelings and emotions.

Elijah Brooks and Vanessa Rodney use their skills.

In class, students have prepared by playing an assortment of improv games in which others select environments, relationships or emotions for them to bring to life.

Students said improv was difficult to adjust to in the beginning but turned into a creative freedom less restrictive than performing from a script.

“By using improv to create the material, we are focusing on what they bring intuitively as opposed to intellectually to characters and scenes,” Prejean said. “That is the way we approach acting in this program. That is what is going to lead to a greater truth on stage and in their lives.”

Another part of the performance will come from written material Talented Theatre 1 students are generating in groups.

Admission is $5 for general audience members and $3 for students.

Tickets will be available at the door.

The Magnolia Companies of LA honored long-term team members for their tenure with the company during the recent Employee Appreciation... read more