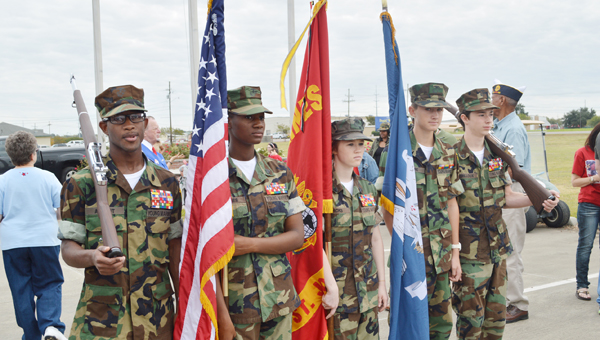 Members of the St. John Parish Young Marines stand at attention prior to the Presentation of the Colors at the Southeast Louisiana War Veterans Home’s Veterans Day celebration in November 2014. (Monique Roth/L’OBSERVATEUR)

RESERVE — The St. John Parish Young Marines are raffling off a gift basket filled with goodies from local businesses to bring Christmas joy to residents of the Southeast Louisiana Veterans Home in Reserve.

Community members are asked to pay $4 per chance to win a basket of soaps, shampoos and gift cards from St. John the Baptist Parish restaurants and shops.

Proceeds will go toward purchasing robes, blankets and slippers for local veterans who may not have a chance to celebrate with family this holiday season, according to St. John Parish Young Marines Unit Commander Brian Bertrand.

“Some of the people who live there don’t have family to visit them, so we do whatever we can to fill that void and give them a nice Christmas,” Bertrand said.

Prior to Dec. 16, participants can drop off entry money or clothing and blanket donations to Bertrand at LaPlace Glass Works Inc., located at 130 E. Airline Highway in LaPlace.

The raffle will be promoted through social media on the St. John Young Marines Facebook page, and Bertrand said anyone is welcome to message him to coordinate drop-off times.

The group has also participated in Relay for Life, Toys for Tots and veterans appreciation projects and has seen outstanding support from the community, according to Bertrand.

It’s a branch of the larger Young Marines organization, which boasts over 300 units and 10,000 young recruits internationally.

The organization came to the River Region after Executive Officer Michael Hoover was inspired to implement a local youth program after hearing of successful Young Marines programs on the East Coast.

Hoover assigned Bertrand as unit commander because of his experiences as a former enlisted Marine and his love for working with children.

Bertrand said staying in contact with parents and teachers allows him to address potential behavioral problems and give accolades for achievements during training meetings held every other Saturday.

“Young Marines isn’t a recruiting base,” Bertrand said. “We don’t teach weapons, tactics or self-defense, but they go through the same rite of passage as Marines do with not being able to join until they complete boot camp.

Bertrand said the most rewarding part of being unit commander has been watching Young Marines grow and meet their potential.

He’s particularly proud of Felix “James” Perilloux, a former Young Marine of the Year who achieved his unwavering dream of going to West Point, a military academy in New York.

He’s also proud of Wesley Patterson, an East St. John High honor student and graduating senior who has been part of Young Marines since he was in sixth grade.

“I really love it,” Patterson said. “I’ve been in Young Marines for a while, and they teach you about family, teamwork and the great things the military has done for the country.”

Patterson recently attended a ribbon cutting and dedication for the Southeast Louisiana Veterans Home’s new recreational building, where he and other Young Marines recruits presented the posting of colors.

Enrollment is open to boys and girls ages 8 to 16 who are in good standing in school. Once inducted, Young Marines may remain in the organization until high school graduation.

Applications are available online, and Bertrand expects to accept new recruits in February.

For more information, contact Bertrand at 504-628-0418 or visit stjohnyoungmarines.com.