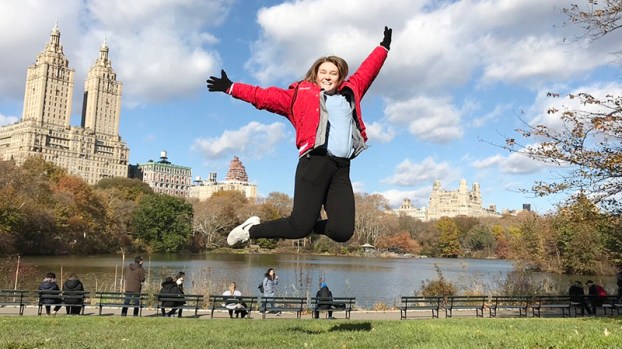 RESERVE — While others gathered with family and sat down to a Thanksgiving meal, Riverside Academy senior Lindsay Noyes danced through the streets of New York City in the 91st annual Macy’s Thanksgiving Day Parade.

She was invited to be part of the Spirit of America Dance Team after demonstrating excellence at color guard camp over the summer. Others from Riverside Academy were invited to go and declined, but Noyes decided to seize the once-in-a-lifetime opportunity.

The Friday before Thanksgiving, she came home around 1:30 a.m. following a delayed football game against Dunham, finished packing her bags and hopped on a flight to New York only a few hours later.

Her mother, Lesley Noyes, and color guard coach Erin Jung accompanied her on the trip.

Lindsay Noyes participated in the Macy’s Thanksgiving Day Parade last month as part of the Spirit of America Dance Team, an honor she earned after demonstrating excellence at color guard camp over the summer.

Jung said Noyes’ natural leadership abilities shine through in her position as captain of the school’s award-winning color guard.

“She was selected at their summer camp, and it was based on leadership, talent, etiquette and teamwork,” Jung said. “She’s a very strong leader. She seems to be very independent, and she works hard.”

Noyes has participated in color guard for four years and took dance classes prior to high school.

For years, she’s enjoyed dancing in Mardi Gras parades and performing before crowds on the football field.

“When you’re performing on the field and people are looking out at you, they see you as the color of the show,” Noyes said.

The Macy’s Thanksgiving Day Parade was much larger in scale than any routine Noyes had performed before.

In New York, she was one of 600 dancers from across the nation, dressed in red, white and blue and performing choreographed routines for a national broadcast in freezing weather.

Noyes said dancing for TV in front of the Macy’s building on 34th Street was intimidating, but she had a wonderful time meeting new people and enjoyed seeing the crowds as the group traveled down other city streets.

“With Mardi Gras parades, you have to smile and look forward, but there you could wave to people in the crowd,” Noyes said.

“It was a good experience. I met a lot of people, and we were put into smaller groups of 20 with a chaperone for some of the events since there were 600 of us.”

Dancers were sent a video to begin learning choreography prior to the trip and spent hours in practice runs and dress rehearsals in the days leading up to Thanksgiving Day.

Aside from the main performance, Noyes said her favorite part of the trip was the dress rehearsal for NBC, held Monday in Macy’s Herald Square.

When she wasn’t busy practicing or trying to catch up on sleep, Noyes explored the city and turned her trip into an unforgettable experience.

As a first-time tourist to the city, she was excited to see Charlie and the Chocolate Factory on Broadway, cruise through the harbor near the Statue of Liberty and visit the Empire State building.

Lesley Noyes said traveling to New York with her daughter was an “awesome, once-in-a-lifetime experience.”

Above all, she’s proud of Noyes for being a good person and dedicated student.

Noyes is the daughter of Stephen and Lesley Noyes of Reserve. She plans to attend Louisiana State University next year with ambitions to one day attend medical school.