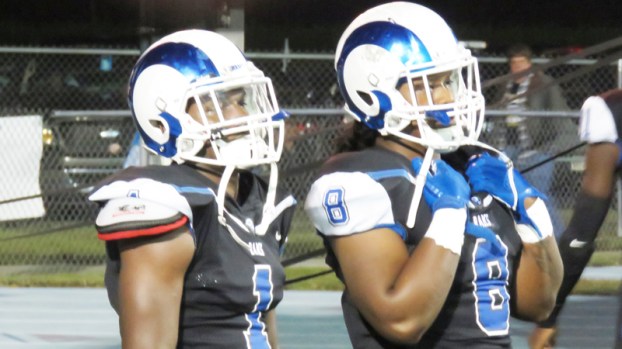 Running back Niko Roy, right, rushed for 126 yards on 17 carries and scored two touchdowns. Kylan Duhe, left, rushed for 128 yards and a pair of touchdowns on 25 carries in Friday's win over Logansport.

EDGARD — The West St. John Rams have been saying all year, the road to New Orleans goes through Edgard.

Friday night, they proved it.

No. 1 seed West St. John knocked off defending Class 1A state champion Logansport, dominating the Tigers in a 34-18 victory that sends the Rams to the finals for the first time since 2007.

West St. John (11-2) will play No. 2 seed Kentwood at noon Thursday for the 1A non-select state title. Logansport suffered its first loss of the season at the hands of the Rams and saw a 27-game winning streak ended.

Quarterback D’Andre Gaudia was 5-of-10 for 135 yards and one touchdown.

“It means the world,” said West St. John coach Brandon Walters, who was nearly drowned out by the Mardi Gras-style party taking place on the turf of Dinvaut Stadium after the game. “We’ve been preparing for it since January. The past two years we felt we were right there and now we’re one step closer to our goal.”

The Rams got there because of their running game and defense.

Running back Niko Roy rushed for 126 yards on 17 carries and scored two touchdowns. Kylan Duhe rushed for 128 yards and a pair of touchdowns on 25 carries.

“They told me I had to do my job, because there’s no tomorrow unless I do my job,” Duhe said. “I did my job.”

In all the Rams gained 280 yards on the ground. Quarterback D’Andre Gaudia was 5-of-10 for 135 yards and one touchdown, a 19-yard strike to Aason Moll. He attempted only one pass in the second half.

Roy said the game plan was to run right at the Tigers, who came into the stadium with intimidating size.

“It was a pounding game,” Roy said. “We had to pound right at them.”

Once again the defense came up big.

Aaron Moll, No. 2, and D’Andre Gaudia, No. 13, get ready to charge the field before Friday’s game.

Logansport quarterback Dalton Shaw, who came into the game having thrown one interception all season, was intercepted three times — twice by Dontrell Davis. Shaw finished 9 of 27 for 106 yards and two scores, both to TCU commit John Stephens, who had four catches for 35 yards. Stephens also scored on a 55-yard interception return.

“Our guys have gone against some of the best receivers over the years,” Walters said. “They want the best.”

West St. John set the tone early, jumping out to a 21-0 lead. The Rams’ first drive covered 76 yards, capped by a 19-yard pass from Gaudia to Moll with 6:15 remaining in the first quarter.

The Rams stopped Logansport’s next drive with his first interception, but WSJH couldn’t convert it into points. They would score again with 58 seconds remaining in the first quarter when Roy ran up the middle from the 1-yard line to make it 14-0. Then the Rams made it 21-0 with a 1-yard run by Duhe with 5:45 remaining in the first half.

Logansport scored two touchdowns in the span of 30 seconds at the end of the first half. The first came when Stephens stepped in front of a screen pass and returned the interception 55 yards for a score. The point after attempt was blocked.