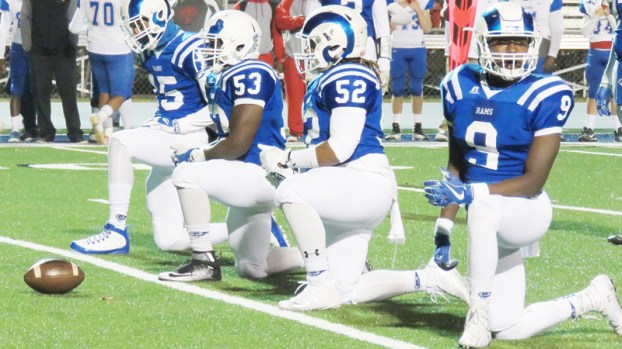 Setting the defensive line for West St. John High last week in the quarterfinals against Jonesboro-Hodge is Jonathan Porter, from left, Jayuan Pierce, Kelon Gardner and Covan Barnes. The Rams defense was on the field a lot thanks to four WSJH turnovers but held strong, giving up only six points.

EDGARD — Four quarters and one of the longest winning streaks in recent Louisiana high school football history stand in the way of West St. John High and a trip to the 1A state championship game.

The Rams (10-2) host their semifinal contest against Logansport High at 7 p.m. Friday in Edgard, welcoming a Tigers squad that has won 27 straight ballgames, including the 2016 state championship.

The Tigers’ obvious size and strength has catapulted the Northwestern Louisiana school to the program’s greatest heights.

D’Andre Gaudia, No. 13, gets ready to take the snap from center, joined on his right by Niko Roy and his left by Kylan Duhe.

“They throw the ball well, and their quarterback gets the ball out of his hands quickly,” Walters said. “They have guys spread out all over the field who are really good and can play. We have to be hitting on all cylinders, bring our best game this week and be prepared.”

Quarterback Dalton Shaw, who threw for 300 yards and two touchdowns last week in Logansport’s 40-18 victory over the Varnado Wildcats, leads the Tigers.

Logansport (13-0) is coming off, perhaps, its best game of the season, having generated 566 yards of offense, while forcing its opponent to punt eight times and run 12 negative-yardage plays.

The Rams are certainly up to the challenge, as evidenced by their 20-0 second half showing last week against Jonesboro-Hodge. That lopsided score followed an intense first half that ended with WSJH and JHHS deadlocked at 6.

“We definitely chewed them out a little bit at halftime — had to remind them why we’re here and what this game meant,” Walters said. “We turned the ball over too much in the first half. We had three of them and another in the second half. Fortunately, our defense stood up, only giving up one score through all of them.”

Linebacker and running back Niko Roy proved to be the second half change his coaches wanted to see, finishing with 11 tackles, three for loss and the game-securing interception.

On offense, Roy rushed for 118 yards and two touchdowns. He teamed with Kylan Duhe to form a devastating 1-2 rushing attack.

“I’ve seen it all season, every week,” Walters said. “(Roy) and Kylan Duhe carry a load, and we run it pretty well behind that offensive line. Those guys are really working hard and carrying the load. They are making us go.”

The expanded threat in recent weeks of Dontrell Davis at wide receiver and quarterback has added another option to the Rams offense, which is led by starting quarterback D’Andre Gaudia.

“(Davis) is a threat all over the field — with the ball in his hands and without it,” Walters said. “You have to account for him, and he can throw the ball.”

The warm South Louisiana fall is finally starting to give way to some cold weather, as the low last week in Edgard touched down to 37 degrees.

Milder temperatures are predicted this week, with the Friday Edgard high reaching 69 and low dropping to just 56.

“It was pretty cold at practice the last week or so, but our linemen make it a point to come out there sleeveless. We call them Polar Bears,” Walters said. “The line — the big guys in the trenches — they love it. It was pretty nice this past game.”

EDGARD — The West St. John Rams finally got over the quarterfinal hump. After losing in the third round of... read more