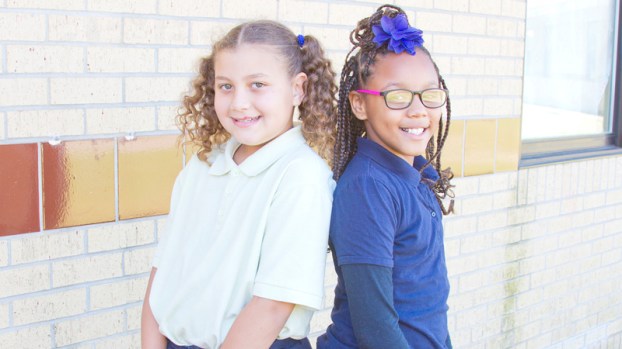 RESERVE — Fifth Ward Elementary School students Tia Vicknair of LaPlace and Kaci Frank of Reserve lead by example in the classroom and demonstrate strength of character in their kindness and compassion toward others.

The girls are principal’s list students with an innate love of learning and a growing list of accomplishments.

Kaci, 8, was honored as student of the quarter and named a third grade young ambassador.

She’s won the spelling bee more than once and received the heart of gold award and No. 1 helper for her actions in the classroom, according to her mother, Frednetra Henderson.

Kaci’s maintained her grades as her family relocated to and from Texas to take care of her grandmother. Since returning to St. John the Baptist Parish, she’s started the process of joining Girl Scouts, a new addition to Fifth Ward’s extracurricular offerings, and is staying involved with 4-H.

Kaci is an avid dancer with hopes to rejoin the Hollywood Highsteppers Dance Team so she can participate in Mardi Gras parades. Her other hobbies include talking to her grandmother on the phone and making slime.

Though Kaci’s favorite part of going to school is painting in art class, she enjoys learning other subjects.

“My favorite part of school is how everybody learns,” Kaci said. “I want to keep going higher and higher and learning more.”

“Kaci is my go-to student,” Howard said. “She started off shy at first and then started opening up. She’s very sweet and doesn’t complain.”

Howard described Tia as a perfect student and a joy to teach.

“Tia is awesome to work with,” Howard said. “She came to class prepared and always ready to learn. She still visits me every morning.”

Tia said she jokingly asked Howard to fail her so she could stay in her class.

Failing was never a real option for Tia, a member of Jr. Beta Club who has been recognized for achieving honor roll and principal’s list.

Tia enjoys learning new material in science and excels in English. She was one of the top scorers on the ELA portion of the LEAP test last year with an advanced rating, according to her mother, Keisha Traywick.

Also in the process of joining Girl Scouts, Tia has represented Fifth Ward at the Andouille Festival and previously participated in gymnastics. Outside of school, she loves playing with her pet snake.

Though she only recently met Tia, Fifth Ward counselor Renisha Oubre said she stands out from other students because she is well spoken for someone her age.

Oubre also spoke highly about Kaci, describing her as a compassionate, well-rounded student who goes beyond what is required.

“If we had more like Kaci and Tia, we would have an awesome school,” Oubre said.

Kaci and Tia have common ground in how they relate to others, showing people kindness when they are hurting and offering to be a rock of support.

Traywick said she’s proud of the strength Tia has shown over the past several months following the separation of her parents. She said Tia has kept her grounded and given her the strength to face each new day.

“She’s strong; independent,” Traywick said. “Even with everything going on, her grades never slipped. I’m not taking the separation well, but she’ll come up to me and tell me, ‘Mommy, you’re so strong.’”

“You can have the worst day, and she makes it better,” Henderson said.

“Kaci’s a people person. She’s friendly, and when she sees someone crying, she’ll go up to them and hug them. She’s so sensitive and emotional and compassionate. That’s my little soldier. My miracle baby.”