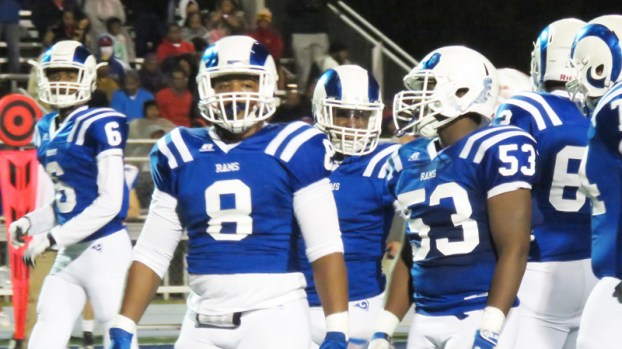 Niko Roy, No. 8, stood up to lead his Rams teammates Friday night, scoring two second half touchdowns, while notching a 2-point conversion run and interception on defense.

EDGARD — The West St. John Rams finally got over the quarterfinal hump.

After losing in the third round of the playoffs the last two years in Class 2A, No. 1 seed West St. John put itself back into the Class 1A semifinals with a solid 26-6 victory over No. 8 Jonesboro-Hodge Friday night at Dinvaut Stadium in Edgard.

“It shows the character and the fortitude of this team,” Rams coach Brandon Walters said. “They’re young in spots, and it showed tonight in a lot of places, but we have a lot of veteran kids in the spots where we need them. They had it on their minds that they wanted to be successful. They wanted to work.”

The Tigers and the Rams were nearly mirror-image teams, right down to the team uniforms. Both also liked to run the ball — a lot.

Jonesboro-Hodge workhorse Kameron Booker rushed for 130 yards on 32 carries but scored only one touchdown. Quarterback Reginal Shallowhorn passed for 129 yards.

The Rams, on the other hand, rolled up 332 rushing yards on the legs of Kylan Duhe, Dontrell Davis and Niko Roy. All three scored touchdowns, but Roy scored two in the second half, added a 2-point conversion run and nabbed an interception on defense. On his second touchdown, he hit the line and moved it with him 18 yards to the end zone.

“The offensive line helped out a little bit,” he said.

Walters said it was the Jonesboro-Hodge Tigers who hit the Rams hard early in the game.

“We had to get their heads together at halftime, kind of chewed them out a little bit and let them know why we’re here,” Walters said. “I let them know that, the last two years, this is where we stopped.”

West St. John owes this one to its defense, which held Booker in check for much of the night, and came up with numerous crucial stops, turnovers and sacks. The Rams recovered three fumbles, intercepted two passes and forced the Tigers to turn the ball over on downs three times.

“We work hard and practice and try to roll that over into the game,” Gardner said. “It’s very big for us.”

Covan Barnes, meanwhile, came up with a pair of fumble recoveries, both of which led to Rams touchdowns.

After Barnes recovered his first fumble with 19 seconds remaining in the first quarter, Duhe broke free for a 40-yard touchdown run on the first play of the second quarter.

Jonesboro-Hodge tied the game with 2:19 remaining when Booker scored the Tigers’ lone touchdown on a 3-yard run. Their kick failed as well. The Tigers had another chance to score, but on the final play of the half Wantrell Williams intercepted Shallowhorn’s pass in the end zone as time expired.

The loss eliminates the Comets (9-3) from the Division II football playoffs, one game short of a second straight championship game appearance.

Both teams were deadlocked in a scoreless battle after the first quarter, with U-High (12-0) getting on the board first, notching a field with 8:30 left in the second quarter. That was extended to 10-0 following an under-two minute touchdown.

That was as close as the Comets would get, as U-High extended its lead with three touchdowns and a field gold before Philip Tran closed the scoring for SCC and the game with a 21-yard touchdown run with just 21 seconds left in the game.

Neither teams’ offense was frozen by the cold, but Notre Dame (11-0) proved the more dynamic of the two, scoring a 41-31 victory over Riverside Academy (5-5) and advancing to the Division II football championship.

The Rebels owned leads at halftime (17-13) and between the third and fourth quarters (31-27) before a rough fourth quarter did them in.

Waylon Bourgeois was especially strong for the Pios, rushing for three second-half touchdowns, including the one that put Notre Dame ahead, 34-31, with nine minutes left to play during Friday night action in Crowley.