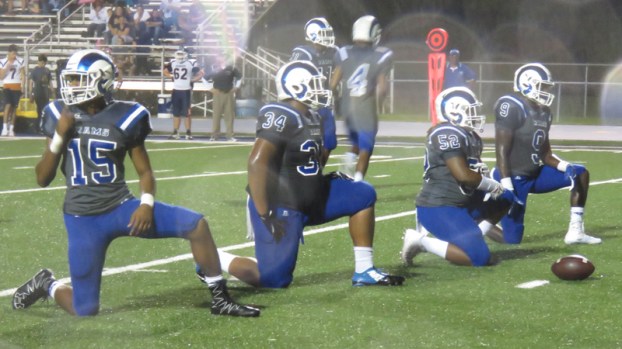 The Rams (9-2) roll into the Class 1A quarterfinals this week on a seven-game winning streak thanks to offensive and defensive linemen who consistently own the line of scrimmage.

“Our offensive line has basically been playing together since eighth grade, and they make it easy for the quarterback,” Rams coach Brandon Walters said. “Brett Bailey at center helps sometimes make checks and calls for the quarterback, which makes his job a lot easier. They are there to help (the quarterback) calm down and not let the moment be bigger than he is. They are like surrogate coaches on the field. It has worked for us.”

Bailey is joined up front by starters at guard, Jayuan Pierce and Hauron Robinson, as well as tackle starters Kyree Thorne and Calieb Batiste.

The Rams are on pace to produce two 1,000-yard running backs and more than 25 rushing touchdowns.

Walters said his defensive linemen have also been working hard and putting up outstanding numbers throughout the regular season.

“They understand they can make it really easy on the secondary and the guys behind them by getting after the offense and stopping things up front,” Walters said. “We like to play a three-and-out style, and it’s really working for us.”

Defensive tackles Kelon Gardner and Horace Lewis are joined in the starting front by ends Covan Barnes and Jonathan Porter.

Pierce, Thorne and Bailey have also played snaps at defensive line when needed.

“Those guys up front make everything go,” Walters said. “We’ve had to hold the line down because Horace Lewis has been out with injury, but he is fighting to get back and return for us.”

The Rams’ next challenge is stopping the Jonesboro-Hodge High Tigers, who travel from Jackson Parish to Edgard for a Friday night quarterfinal contest sporting a seven-game winning streak and 92-8 scoring margin in their last two ball games.

“They are pretty athletic at the quarterback, running back and receiver spots,” Walters said. “Those guys are pretty fast and play really well. They pose some obvious challenges. We’re going to have to be prepared to play.

“Fortunately for us, we have played and practiced on the Thanksgiving holidays for quite some time and look forward to doing it. Our guys are used to sacrificing time over the Thanksgiving break for something meaningful. We stress to them — would you rather be at home thinking about football or at practice playing football?”

LAPLACE — The Comets started strong and took all the drama out of their playoff game, rolling to a 28-0... read more