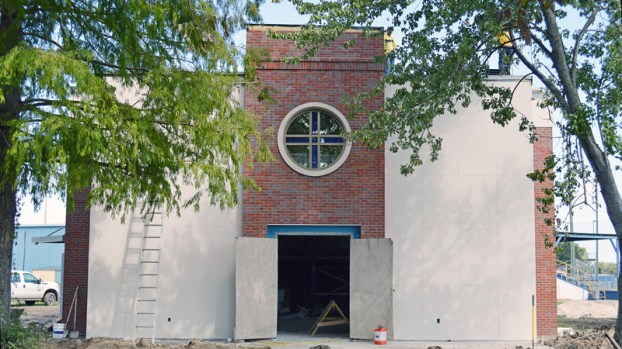 St. Charles Catholic High School’s new 2,500 square foot Chapel, scheduled to open after a blessing and dedication Jan. 30, seats up to 150 people and makes it possible to hold Mass for an entire grade level. (Photo submitted by St. Charles Catholic)

LAPLACE — Following a blessing and dedication scheduled for Jan. 30, St. Charles Catholic High School’s new Chapel will serve as the heart of the campus, allowing up to 150 students at a time to gather for prayer and celebration of the Mass.

Community members were invited to preview the Chapel Tuesday to survey its progress and become aware of sponsorship and memorial opportunities.

The Chapel will be open before, during and after school hours to forward SCC’s mission of educating students in a diverse, Christ-centered environment while inspiring them to excel in faith, extracurricular activities and service, according to Student council president Claude Hill III.

“We are called St. Charles Catholic High School for a reason,” Hill said. “The addition of the Chapel creates another easily accessible atmosphere for students and faculty to grow and cultivate their faith either individually or collectively.”

The old Chapel, a standard size classroom, wasn’t large enough to accommodate more than 30 to 40 students at a time, according to Dr. Courtney Millet, director of admissions, instruction and institutional achievement.

She said the new 2,500 square foot Chapel seats up to 150 people, making it possible to hold Mass for an entire grade level.

“The old Chapel didn’t provide a quiet, reverent space for students,” Hopeck said, noting the new Chapel as a separate structure has a more calming and serious atmosphere.

The structure is situated in the center of the back courtyard, which will also feature a dedicated grotto and picnic benches for students to use during lunch.

Millet and Hopeck were among those in charge of selecting the Chapel’s furnishings.

Hopeck said the outside is modern and inviting, while the inside serves as a callback to tradition and history with its Gothic, Baroque and medieval influences.

Grand wooden entry doors, a rosette window and a skylight overlooking an Altar signify it as a place of worship.

One such item is a beautiful, handmade red oak carving donated by James Schexnayder in memory of his daughter, SCC alumna Courtney Schexnayder Guidry.

Millet said the addition of the new Chapel would not be possible without donations and support.

“I’m just so appreciative of the generosity of everyone in the community who came together to make this possible,” Millet said.

Approximately $40,000 has been raised to fund the new addition, according to Hopeck, and the school aims to raise an additional $40,000.

Memorial sponsorships for statues and furnishings are still available to cover the remainder of the expenses.

Individual memorials are also available. For more information, call Millet at 985-652-3809 or 504-628-2641 or email millet.courtney@stcharlescatholic.org.

The Chapel is one of many renovations to SCC this year, which also include a new conference room and entrance, updated safety features, an expanded commons area, an updated gym and two Mac labs.

LAPLACE — From Nov. 1-3, seventh through eighth grade St. John 4-Hers attended Challenge Camp, which provides an opportunity to... read more