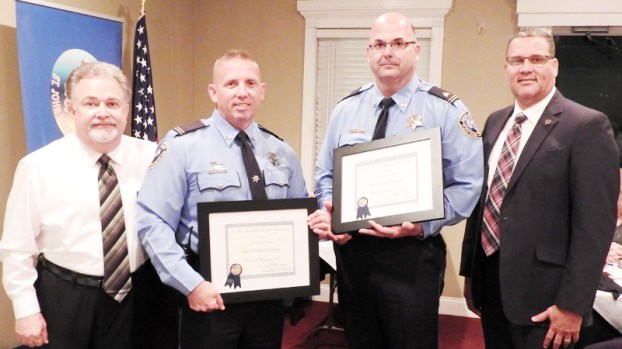 Woodruff and Hughes also made several arrests for narcotics and other crimes, St. John Parish Sheriff Mike Tregre said, in addition to assisting in the pursuit and apprehension of burglary and flight suspects.

Some of these pursuits took place with suspects fleeing in vehicles and on foot, posing a greater risk to the officers’ safety, Tregre said.

“It’s just an exceptional piece of work,” Tregre said. “It’s very rare to have a team of officers that can make that many arrests. I hope they can continue helping us with the warrants because it’s pretty backlogged right now.”

Woodruff and Hughes, who work in the Sheriff’s Office Warrants Division, were named Officers of the Month by the St. John Business Association Nov. 8 in recognition of their remarkable work.

Rather than recognizing one officer per month as per standard, the St. John Business Association chose to recognize Woodruff and Hughes because they worked together as a unit to apprehend wanted subjects.

The officers were presented framed certificates for their contributions and recognized by St. John Business Association President Steven Fraker at Petra’s Restaurant in LaPlace.

RESERVE — A half-dozen area residents have been arrested, and another is being sought following a multi-week drug investigation that... read more