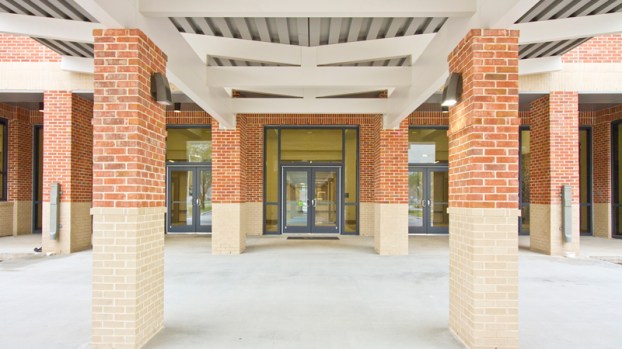 Lake Pontchartrain Elementary, above, is opening its doors to students Jan. 8 at 3328 U.S. 51 in LaPlace more than five years after the original site was severely impacted by flooding from Hurricane Isaac.

LAPLACE — A fully functional gym, specially designed fine arts classrooms and a 4-foot elevation to guard against flooding are among the highlights of the new Lake Pontchartrain Elementary building, which opens its doors to students Jan. 8.

The opening of the new building comes more than five years after the original site, also located at 3328 U.S. 51 in LaPlace, was severely damaged by flooding from Hurricane Isaac.

For the past five years, LPE students in prekindergarten through eighth grade have attended school in a system of portable classrooms located on East St. John Preparatory School’s campus.

Principal Jason Beber said he anticipates a seamless transition because school administrators have planned lunch cycles and dismissal procedures to simulate what students will encounter in the new building.

Parents will have a chance to view the new Lake Pontchartrain Elementary at a ribbon cutting and open house event to be held prior to the school’s official opening.

“We’re very excited,” Beber said. “It’s a very beautiful building. I had the privilege to tour with the leadership team, and we’re excited to be in those four walls and have a gym, cafetorium, playground and band room.”

It covers approximately 100,000 square feet and is optimized for 800 students, according to Z. Ames Yeates of Yeates and Yeates Architects, L.L.C., the organization overseeing the construction of the building.

Yeates said the school was designed with safety in mind.

The front doors of the school and all classroom doors lock after students have entered, and discreet cameras placed throughout the school enhance security.

New vehicle drives and parking lots separate the parent drop-off line from the bus circle to ensure students will not have to cross vehicular lanes to gain access to the building.

With five bright, color-coded wings stemming from the main corridor, the school can accommodate the needs of various age groups so younger children will not have to share hallways and facilities with older students.

Head Start/ pre-k students have a separate playground. The school can accommodate the needs of various age groups so younger children will not have to share hallways and facilities with older students.

The new design includes a separate gym optimized for basketball and volleyball with a capacity to seat 480 people.

Cindy Janecke, project manager, has overseen the construction of the new school building and considers the gym one of its greatest attributes.

“That was one of the main things the community told us they wanted,” Janecke said, noting the gym will allow student athletes to play their first home game in years.

As per FEMA’s requirements for funding the project, the land supporting the structure has been raised four feet to guard against potential future flooding.

The fields surrounding the school are currently being elevated so children can take advantage of the outdoor space, Yeates said.

Once the area is raised, it will be possible to incorporate other elements such as a baseball field.

“It’s an attractive school that functions well,” Yeates said. “It will be an excellent place for children to come and learn.”

Montz said the new building tells a story of resilience and emphasizes St. John’s ability to recover from natural disasters.

Lake Pontchartrain Elementary students have also remained resilient, and the future of the school looks bright.

In addition to gaining a new building, the school recently improved its performance score by 10.1 points and has been named a Top Gains school by the Louisiana Department of Education for outperforming its predetermined growth goal.

Beber credits the recent improvement to faculty and staff.

“We had a vision when I came three years ago that we would change from a failing school to a high-performing school,” Beber said.

“We have two wonderful assistant principals and a leadership team, and we came up with a plan based on student data. Now the kids are outperforming other districts.”