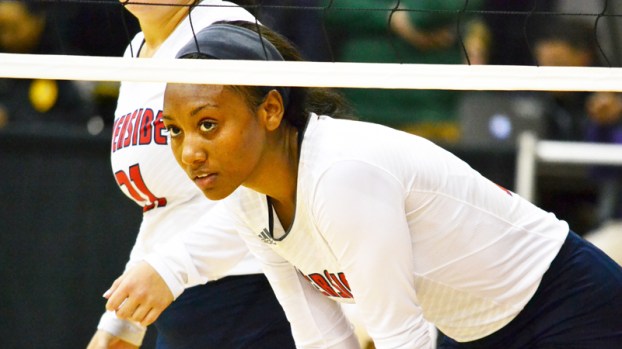 Despite winning against University Lab earlier in the season, the Lady Rebels struggled to keep up offensively, ending the match with scores of 25-18, 25-23 and 25-20.

Riverside head coach Brandi Melancon knew from observation that U-Lab would be a tough opponent with a style and strategy similar to her team.

“We knew we had to come out and execute, take care of the ball and not make errors,” Melancon said. “That’s exactly what didn’t happen. The only way to execute is if you pass the ball well.

“University Lab played like they were on a mission. We were on the defensive side (Thursday), not offensive, and it showed in the scores.”

The girls, especially the seniors, took the loss hard because they anticipated going much further than the quarterfinals, Melancon said.

“It’s hard for them to hold their head high right now, but the seniors have definitely made a mark on the program,” she said. “They played a heck of a season.”

Melancon said she’s proud of how the girls have performed. Since August, the team operated well against skilled opponents, placed first in District and now exits the season with an impressive 30-12 overall record.

Sydney Joseph, Briley Becker and Abby Bourgeois have been standout players all season, and Thursday’s game was no exception.

During the match against University Lab, Joseph and Becker contributed 11 and 9 kills, respectively, and Bourgeois handed out 18 assists.

The LHSAA championship game is being played between Notre Dame and first seed Pope John Paul II is at 11:30 a.m. today in the Pontchartrain Center.

RESERVE — They may have been a little slow out of the gate, but the Riverside Rebels showed they catch... read more