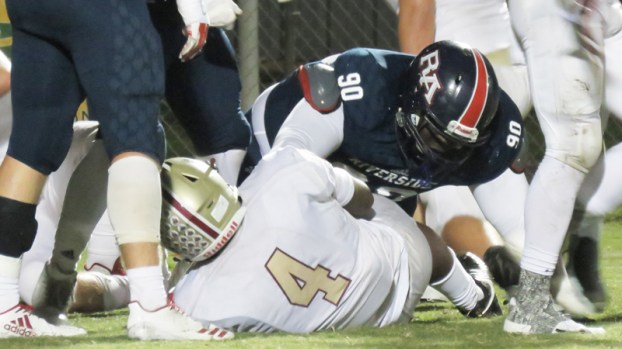 Riverside Academy’s Wilbert Robertson, No. 90, gets up from a tackle after bringing down Northlake’s Wesley Brown.

RESERVE — They may have been a little slow out of the gate, but the Riverside Rebels showed they catch up quickly.

The defending Division III state champion Rebels, who had their third open date of the season last week, scored two touchdowns in the final 2:13 of the first half, then added 15 points in the span of 58 seconds in the second half en route to a 42-21 victory over No. 12 Northlake Christian Friday night in Reserve.

Louis Cheneau rushed for 142 yards and one touchdown. Quarterback Jordan Loving passed for 114 yards and three touchdowns and ran for another. Garland Robertson scored on an 80-yard kickoff return and set up another Rebels score with a 63-yard punt return.

It all added up to a big win for the No. 5 seed Rebels (4-4), who travel to No. 4 Dunham for next week’s Division III quarterfinals. Northlake Christian finished with a record of 3-8.

While Rebels coach Chris Lachney insisted last week’s open date had no impact on his team, he did say his team took its sweet time getting going. He gave the credit to the Wolverines.

“They’re a good football team,” Lachney said. “We tried to tell everybody, our players that. Once you get into the playoffs you’re playing good teams. They’re a real physical football team and they gave us all we wanted at first.”

Using their multi-player wildcat offense, the Wolverines rushed for 297 yards. Nick Morman led the rush with 190 yards on 23 carries and scored one touchdown. Wesley Brown rushed for 111 yards and scored two touchdowns.

“Other than the special teams, I thought we won the football game,” he said. “I thought we outplayed them from down to down, from series to series. Anybody can look at that film, they can see Northlake can play with anybody. I’m proud of my kids. I think we were the better football team tonight.”

Nicholas Martin-Morman, No. 1, was one of many Wolverines who lined up at quarterback in a run heavy Northlake Christian offense.

The Wolverines hurt themselves with a fumble that led to one Rebels touchdown and a bad snap on a punt, which led to another.

But they started with a 74-yard, 7-play drive capped by a 1-yard touchdown run for Brown. The Wolverines led 7-0 just 2:56 into the game.

Riverside did not score until the 2:13 mark of the first half, and needed a big play to get it. Robertson set up the score with a 63-yard punt return to the Wolverines 13-yard line. Two plays later, Loving connected with Banks for the Rebels’ first score.

Just two minutes later, the Rebels recovered a bad punt snap at the Northlake Christian 4 and, on third down, Loving scored on a keeper. He was hurt on the play, however, and was on the sideline for the missed PAT kick, leaving the Rebels with a 13-7 halftime team.

Northlake Christian started the third quarter strong, too, and took a 14-13 lead on a 42-yard run by Brown with 8:57 remaining in the quarter.

The Wolverines’ lead did not last long, though, as the Rebels three plays later – most of it on a 59-yard run by Cheneau that put Riverside ahead 20-14.

Loving would put the Rebels ahead 27-14 with a 19-yard pass to Jeremiah Bigham with 3:29 remaining in the third.

After Northlake Christian scored its third and final touchdown on a 1-yard run by Brown, Robertson showed his speed again with an 80-yard kickoff return to put the Rebels ahead 35-21 with 9:56 remaining in the third quarter.

The Rebels got one more score after Wilson Battley recovered a Wolverines fumble at the Northlake 27. Three plays later, Loving threw an 11-yard touchdown to Kash Foley for the final touchdown with 8:58 remaining in the game.

The Wildcats’ comeback season came to an end in North Louisiana.

The win improves RHS’ record to 8-2, while sending the Wildcats to a 5-6 close.