Lyons: Visits with area coaches give some insight into coming season 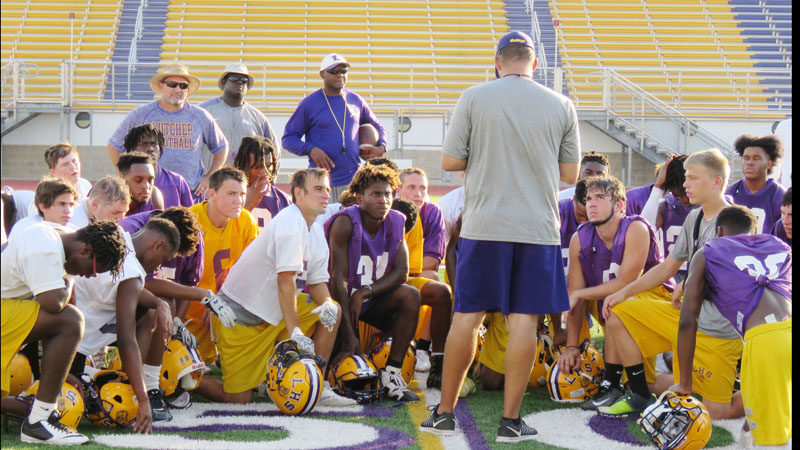 It is approximately 120 miles from the offices of L’OBSERVATEUR in LaPlace to West St. John High School in Edgard and back.

That’s not as the raven flies.

That’s if you go the long way, with stops at St. James and Lutcher high schools on the way.

I know this because I made the trip one day last week to kickoff work on the annual football special section, which will be included in our Aug. 23 editions.

And I’m not done yet.

I still have a few schools on my list.

At least I know my way around.

I spent pretty much a whole day driving past sugar cane fields and chemical plants, hoping I didn’t need to stop for anything (because there aren’t many places to stop) and saying hello to some old coaches and old friends.

I even saw a couple of old players who are now young coaches, making me feel old.

The trip took me through three parishes and across the Mississippi River four times.

It was a good day.

My first stop on the River Parishes Tour was West St. John, where coach Brandon Walters was having his team run gassers on the artificial turf of Rudy Dinvault Stadium Tuesday morning.

So is the race for quarterback at West St. John.

Walters still isn’t ready to single out one.

But I suddenly found myself talking to senior center Brett Bailey, who has spent the summer wondering just who is over his shoulder at any given time. He knows it’s hard to replace the graduated Austin Alexander.

“Right now we have guys fighting for the position every day,” Bailey said.

The team also was still trying to recover from its three-day sleepover camp in the gym.

“It was very vicious,” Bailey said. “But it was fun, too. Sleeping in the gym was fun. It’s our home. This is our backyard.”

And they don’t even have to cut the grass.

I had to let St. James coach Robert Valdez know I was coming for a visit.

As longtime assistant coach Danny Shepard put it while I was there:

If you’ve ever been there, you know what he means.

The Wildcats were celebrating this day because senior lineman Jason Dumas had committed that very day to Kent State University in Ohio — via Twitter.

“When I hit (the button), it was, like, such a relief,” Dumas said. “Then everybody comes on congratulating you. I just wanted to get it done before the season started.”

Valdez said he will be counting on Dumas a lot this season.

“He’s not very big,” Valdez said. “He’s vertically challenged for a lineman, but he’s like a bull in a china cabinet. He’s very quick, very disruptive. He has real estate in the backfield.”

He’s so good, in fact, that sometimes Valdez makes him pretend to be hurt.

“So we can get an offensive play off,” Valdez explained. “I’ll just walk up on him and say, ‘Jason. You’re hurt.’ And he looks at me like, ‘what?’ He’ll fall down, shake his head. That’s so our offense can get it’s work in.”

As the sun began to lower in the sky, I headed back across the Mississippi River a final time to see Lutcher coach Dwain Jenkins.

He made me feel old. But that’s OK. I’m about to make some readers feel old too.

Many will remember a highly touted running back at Destrehan High School back in the day named Rondell Mealey, who went on to a stellar career at LSU and a brief stint in the NFL.

Well, his son, Rondell Mealey Jr., is going to be in the Bulldogs’ backfield this season and has the potential to make a name for himself — even as he wears No.  7  like his pop.

“Rondell is poised to be that breakout guy,” Jenkins said.

“He’s going to play in the slot and play running back. He’s not as big as his dad was. He does have that ability to cut like his dad. He’s going to be one to watch.”

Speaking of breakout guys, those who watched last week’s Hall of Fame Game between the Dallas Cowboys and the Phoenix Cardinals got to see River Parishes alumnus Rico Gathers continue to live his dream.

The first one, a 26-yard toss from Cowboys quarterback Kellen Moore for the first preseason touchdown of the year, was Gathers’ first touchdown since he was an eighth grader at Fifth Ward Elementary School.

At the time he played on a combined team with East St. John Elementary for the parish championship.

Legend says he scored four times in that game and then gave up football for basketball.

Of course his first pass was a jump ball.

“It’s what you’ve got to do when you’re working with a basketball player,” the 6-foot-6 Gathers said. “Put it up high where nobody else but him can get it.”

Lori Lyons is sports editor at L’OBSERVATEUR. She can be reached at 985-652-9545 or lori.lyons@lobservateur.com