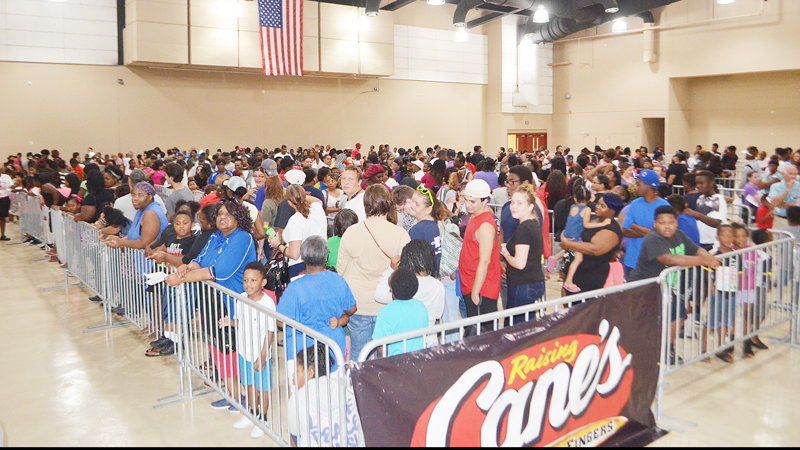 The line was long inside the St. John Community Center July 22 as parents and students attended the giveaway.

LAPLACE — They may not be excited about summer ending, but hundreds of St. John the Baptist Parish school students (and their parents) were pretty excited about getting free school supplies and other goodies at Saturday’s Backpack Extravaganza sponsored by Eliza Eugene’s Blessed to Be a Blessing.

Their parents also could have picked up information from dozens of local agencies who provide various resources to area families.

6-year-old Makayla Hebert and Anthony Hebert, 8, each of Lake Pontchartrain Elementary School got new backpacks and school supplies at the event.

“It exceeded even all of my expectations,” said Eugene. “Everything went very, very well. It was excellent.”

Eugene’s non-profit organization has been holding the giveaway for nearly a dozen years now, with each one growing larger than the previous one.

Last year more than 700 backpacks were distributed. This year the group gave away close to its allotment of 1,000.

“We were worried we wouldn’t have enough,” Eugene said. “But we did.”

Eugene cited the more than 200 volunteers who turned out at Saturday’s event, including members of the St. John Parish Sheriff’s Office, members of the Rotary Club and the University of New Orleans women’s basketball team, coached by St. John native Keeshawn Carter Davenport.

“They kept everything going smooth,” Eugene said. “Everything went so well. We had a plan and it was well-executed. That was important.”

Davenport said she hopes to make the event an annual part of her team’s community service.

“Our mission is to have an impact in three places: the classroom, the community and the court,” Davenport said.

“It was an awesome opportunity for our team to make an impact in my hometown. We love to make young people smile and there were many smiles at this event. We loved it and hopefully we can make it an annual service event.”

Besides getting the area’s children ready to go back to school, the event also gave them a chance to pet turtles and snakes at a mini-petting zoo or burn off some energy in several inflatables.

“It just shows what you can do when everyone comes together,” Eugene said. “It shows unity and togetherness between public and private businesses.”