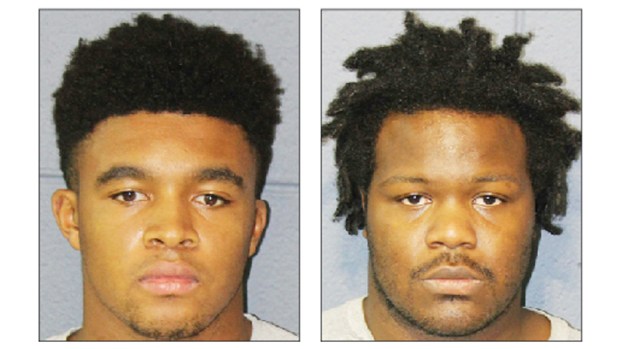 Christian Moses, 18, of Gonzales, left, is charged with negligent homicide, while Tylas Bailey, 24, of Vacherie is charged with vehicular homicide — driving under the influence.

2 charged with homicide in fatal wreck

RESERVE — Both drivers in a fatal December wreck that claimed the life of a 24-year-old local woman are facing homicide charges.

The 7-month-old investigation ramped up with Friday’s arrest of 18-year-old Christian Moses of Gonzales for negligent homicide and Sunday’s arrest of 24-year-old Tylas Bailey of Vacherie for vehicular homicide — driving under the influence.

Louisiana State Police Troop B Spokeswoman Melissa Matey said Bailey’s charge indicates authorities believe either drugs or alcohol was in his system at the time of the crash.

Matey said police drew blood from Bailey, which was turned over to the Louisiana State Police crime lab.

According to Matey, Moses’ negligent homicide charge means impairment was not a factor, but crash scene investigators determined Moses’ vehicle turn in front of another vehicle “was negligent,” leading to the collision.

Investigators said Moses was  driving a 2007 Chevrolet Avalanche northbound on Airline Highway Dec. 15 when he made a left turn onto Central Avenue in Reserve.

At the same time, police say Danielle Georgel of LaPlace was the front seat passenger in a Ford Taurus driven southbound by Bailey in the right lane of Airline Highway approaching Central Avenue.

The Ford struck the Chevrolet on the passenger side as the Chevrolet was crossing the southbound lanes of Airline Highway, Matey said.

According to authorities, Georgel was pronounced dead at a local hospital as a result of injuries suffered in the crash, Bailey was airlifted to University Medical Center with moderate injuries and Moses suffered minor injuries and was taken to St. Elizabeth Hospital.

Georgel and Bailey were not wearing seat belts, and Moses was properly restrained, police said.

Georgel’s mother said her daughter did not have insurance and a donation drive was needed to help pay for the funeral costs associated with the 24-year-old’s tragic death. Those interested supported a gofundme.com fundraiser.

Georgel’s death came as part of a rough 14 days in St. John the Baptist Parish where three wrecks left four dead in December.