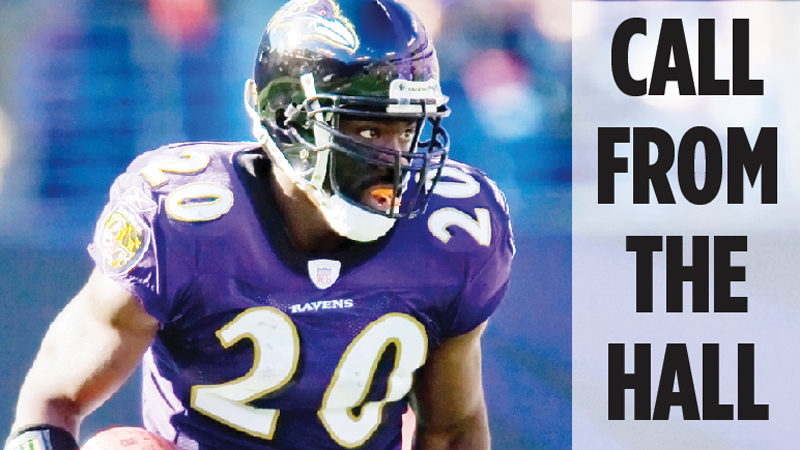 Ed Reed, shown with the Baltimore Ravens, is one of the most accomplished safeties in NFL history. The St. Rose native and former Destrehan High School star, was the 2004 NFL Defensive Player of the Year and holds the all-time NFL record for interception return yards.

NATCHITOCHES — To say Ed Reed’s Louisiana roots are deep would be an understatement.

Shortly before the Baltimore Ravens took on the San Francisco 49ers in Super Bowl XLVII in January of 2013 in the Mercedes-Benz Superdome, Baltimore free safety Ed Reed called the woman who had helped raise him back in St. Rose.

“I want to feed the team,” Reed said to Jeanne Hall, the Destrehan High School office specialist who took the teen in when he began to flounder during his high school days. “He said, ‘I want to give the team a seafood boil — crawfish, shrimp, the works.’ Then he tells me, ‘OK. Make it happen.’

Somehow, they pulled it off, though, getting a local restaurant to cart a truckload of boiled seafood to a New Orleans hotel, where Reed and Hall tried to show the Ravens what to do with it.

“They were hilarious,” Hall said. “Some of those guys wouldn’t even touch it. Edward laughed so much.”

For Reed, it was a chance to show all his teammates his home state and some of the things he loves.

“He truly loves Louisiana,” Hall said. “He loves New Orleans. He loves the food. When he’s home, he just wants to kick back and relax. He can just be Edward, not Ed Reed.”

Tonight, Louisiana will love Reed back as he is inducted into the Louisiana Sports Hall of Fame in Natchitoches.

Reed is the first inductee from St. Charles Parish.

“It’s an honor,” Reed said. “It’s truly a blessing to be honored in my home state, especially for the achievements and things I went through with my teammates with sports in high school. That’s where it all truly started.”

At Destrehan (Class of 1997), Reed was a standout football, basketball, baseball and track athlete and probably could have earned a college scholarship in any one of those sports.

He stuck with football, however, with a little track on the side and went to the University of Miami, helping the Hurricanes win the 2001 national title. He led the nation with nine interceptions that year.

The St. Rose native and Destrehan product was one of the NFL’s best defensive players over a 13-year career. He was elected to the Pro Bowl nine times and his 1,590 yards in interception returns still leads the league. He finished with 64 interceptions, seventh on the NFL’s all-time list.

For several years Reed has sponsored the annual River Parishes football jamboree, he hosts an annual football camp for youths and he helped revamp the Destrehan weight room. Through his Ed Reed Foundation, he also is working to build a park in St. Rose.

The park is important to him because, he says, there are other youths out there like him, who need a place to go.

Reed says he walked a fine line when he was a youngster, occasionally getting into trouble and hanging with the wrong crowd until he was taken in by the Hall family in a situation that has been compared to the story in “The Blind Side.”