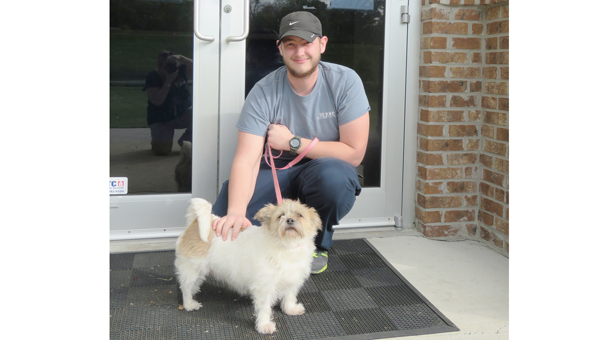 Royce Zeringue, of the St. John the Baptist Parish Animal Shelter, kneels by Honey, one of many animals that can be adopted from the LaPlace facility.

Giving Back: Pups in the Park benefits furry friends

It’s no secret that Lucien Gauff is a dog lover.

The St. John the Baptist Parish Tax Assessor has two Labrador retrievers, a golden named Locket and a black named Mason, both of which came to him from the St. John Parish Animal Shelter.

“I had been wanting to get a dog for a long time, but my wife kept saying, ‘No. I am not a dog person,’” Gauff said. “Then, after we got Locket, she’s the one who said he needed a companion and she’s the one who went to the shelter and came home with the second one.”

Dog-lover Gauff hopes all his fellow dog lovers in St. John Parish will join him Saturday at the annual Pups in the Park Dog Walk to be held at the Thomas F. Daley Memorial Park on U.S. 51 in LaPlace.

St. John the Baptist Parish Sheriff’s Office K-9 Deuce shows off the bullet proof vest which protects dogs in the line of duty.

The event is usually an annual one, but has been canceled due to weather in recent years.

“We’re trying to get it back going,” said Gauff, who is helping organize the event for the Rotary Club of LaPlace.

The entrance fee is $10 per dog and each will receive a commemorative doggie bandana to wear with pride. Additional bandanas will be available to purchase for $10.

There will be contests, including Cutest Dog, Ugliest Dog, Dog/Owner Look Alike, Costume and talent, with ribbons to be presented to the top three finishers.

In addition, there will be agility demonstrations, pet supply vendors, food and drink.

Animal Shelter Director Rachel Sance said the event has helped the facility in many ways over the years.

“The last few years they’ve been able to purchase things for us that we haven’t been able to purchase ourselves because of our budget,” Sance said. “One year we had adoption T-shirts. Another year they purchased this huge cat tower that the cats could play on while we took pictures, which helped us with adoptions. Right now we’re trying to get these glass enclosed cat condos, so we’re hoping whatever they donate to us will be put towards that.

“They would be in the front lobby and with the glass front, the cats would have the window. It’s something that the SPCA has that, when you walk in, it’s just these rows of cats and they’re not in cages so it makes people feel better. The cats are happy and it helps increase adoptions. That’s kind of our goal for this year.”

Funds raised also have gone to the St. John Sheriff’s Office and have been used to purchase bulletproof vests for the dogs in the K-9 division. The dogs will be demonstrating their skills at the event.

A demonstration with Fox was among the highlights of the Makin’ It Do What It Do Motorcycle Ride and Car Show last September in LaPlace. More demonstrations are planned this weekend.

The shelter staff also will be at the Pup Walk Saturday and will be bringing along several adoptable animals in need of homes.

“Hopefully not only will it raise funds, but it also will help some of our animals find homes too,” Sance said.

For more information visit laplacerotary.org, call Gauff at 504-610-8487 or email him at ljg3@bellsouth.net.

LAPLACE — Thomas Malik and Steven Fraker plan to spend a lot of time over the next 30 days speaking... read more