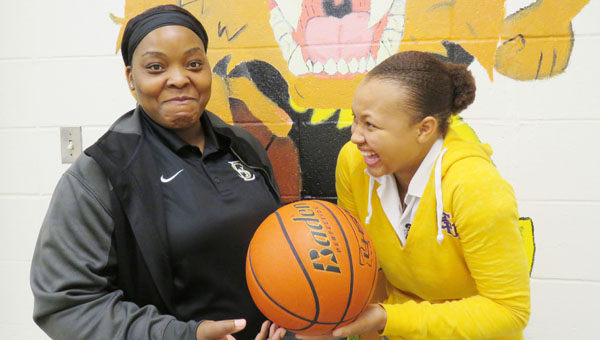 The senior member of the East St. John High girls basketball team was happy to be showing off her new smile the day after having her braces removed.

Then someone had to go and make her cry.

When Tutt learned that she had been selected as the All-St. John Parish Girls Basketball Player of the Year, she burst into tears.

Indya Tutt, a senior who transferred from Chapelle, helped the East St. John High girls basketball team get to the Class 5A semifinals this season.

“I just want to make my mom proud,” she said.

Tutt wasn’t too happy when her mom first told her the family, including 10 children, was moving to LaPlace and she would have to leave Archbishop Chapelle.

Tutt didn’t just have to try a new school, she had to try a new basketball team. She already knew most of the players through various leagues, but she didn’t know what her role would be.

She certainly had no idea the season would take her to the Girls Top 28 in Hammond.

East St. John advanced to the Class 5A semifinals for the first time since 2004, when the LadyCats — including a young player named Stasha Thomas  — got there.

She is now Stasha Thomas-James and is the 2017 All-St. John Coach of the Year.

Thomas James knew this team would be “pretty good.” She had lost no seniors to graduation the year before and then she got two senior transfers, including Tutt.

The team could not get past eventual Class 5A state champion Destrehan during district play, but took care of everyone else.

Once they got in the playoffs, the LadyCats went on a run as the No. 12 seed, eliminating Live Oak, No. 5 Sam Houston and No. 4 Denham Springs in overtime to earn their long-awaited return to Hammond.

Thomas-James said getting her team to Hammond was a thrill. Losing to Barbe 49-45 in overtime was not.

Turnovers and a poor shooting performance did not help the Wildcats’ cause.

“It was good getting there, definitely, but I guess not finishing was hard,” Thomas-James said. “It was bittersweet. I think the hardest thing was to work so hard and then have to come back and do the same thing next year, or wait until next year to get there. I do look to do even better things next year. I look for us to be back in the Final Four.”

Tutt will be moving on, however.

The oldest of 10 children, Tutt said basketball has been her solace as she watches her 2-year-old sister struggle with a physical disability.

“No one knows why I play basketball,” she said. “I do everything for her. I don’t know if she’ll ever be able to play. “

Lindsey Oubre gets tired of people asking her if she drinks milk. “I drink milk all the time,” the Riverside... read more